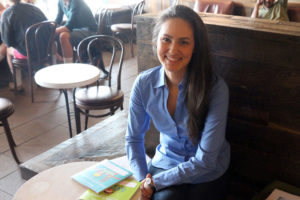 (Updated at 5:20 p.m.) Cynthia Marbley was a teacher at Tuckahoe Elementary when her son was having a playdate with her neighbor’s child.

She and her neighbor were discussing how working mothers could have a more active role in their children’s education when they got the idea for Appleseed Lane.

Appleseed Lane is a monthly, subscription-based company that sends parents a kit for a project that encourages STEM — science, technology, engineering and math — education in children between 4 and 8 years old.

“We want our kids to be exposed to learning in a way that’s dynamic and organic,” Marbley told ARLnow.com from the Starbucks in the Lee-Harrison Shopping Center. “The kids can get their hands dirty. Science has to be hands-on for kids to have that ownership and engagement.”

Marbley and her neighbor got to work quickly on what those kits would look like, how they would change from month-to-month and every other detail creating a service from scratch entails. Marbley decided last summer to leave her teaching job and devote herself to Appleseed Lane full-time, and the company launched its first box in October 2013. 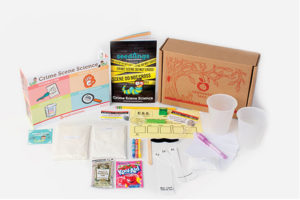 The kits have a different theme every month and include projects with simple, colorful instructions. The theme for June is Sports Science; it is a collaboration with Shawn Marion, an NBA player for the Dallas Maverick and, Marbley said “an old friend.”

Each kit includes every material needed, with the exception of household items like scissors, and include lesson plans led by Professor Caterpillar; lesson plans aligned with National Science Education Standards, Marbley said.

“The boxes are research-based and aligned with what schools are doing,” Marbley said. “We got teachers and education experts to weigh in on the design and lesson and we have a ton of kids test it.”

“My 5-year-old son is one of my official testers,” Marbley said. “He enjoys it because it’s also uninterrupted time with me. It’s an ongoing education and it’s also about relationships. The parents do each project with their child and they can engaged and not on their phones while they’re doing it.” 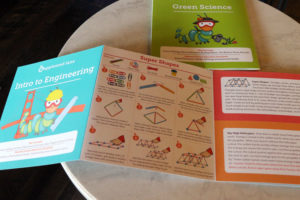 Since launching in October, Marbley said Appleseed Lane has grown 500 percent and is now firmly profitable. The company is bootstrapped outside of friends and family money, and it is shipping nationally.

Appleseed Lane will soon offer parents the ability to purchase a series of lesson plans at once, as opposed to simply receiving one per month, to make it possible to use as homeschooling material. The company is focused on growing nationally and building partnerships, and not yet on offering a wider variety of services like older education or kits focused outside of STEM.

“We want to focus on kids who can develop a love for STEM early on,” Marbley said. “We want kids to get excited about STEM as soon as possible when they’re naturally curious.”

Marbley said transitioning from being a teacher to being an entrepreneur has been a fun process, and it’s helped because teachers are always forced to work well with limited resources, “so we have to get creative.”

As a teacher, Marbley is also keenly aware of the inherent challenges that come with trying to get children involved with STEM, and she’s trying to address the gaps she knows exists. Appleseed Lane recently conducted a drive where they donated one kit for every sale to the Arlington-Alexandria Coalition for the Homeless. That decision, like every other one Marbley has had to make, was a personal one.

“You are involved as you can be with every decision and every dollar spent,” she said when talking about the transition to becoming an entrepreneur. “It’s how companies can become exceptional later on when they grow. Whether you’re making $1 million or $100 million, starting with that foundation is what’s going to keep our company grounded.”