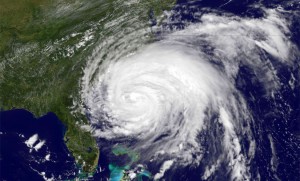 In order to encourage Virginians to prepare for the upcoming hurricane season, starting on Monday the state is again offering a sales tax holiday on emergency supplies.

The National Oceanic and Atmospheric Administration announced today that it anticipates three-to-five hurricanes to hit this season, and one or two “major” hurricanes. The National Weather Service is anticipating a “below normal” hurricane season, but that doesn’t mean NWS scientists aren’t urging caution.

“The prediction of a below normal hurricane season should not be taken to mean Virginia won’t be impacted this year,” said Bill Sammler, NWS warning coordination meteorologist, said in a press release from Virginia Gov. Terry McAuliffe (D). “Let’s all remember that it only takes one storm to cause severe damage and even loss of life.  Everyone should get ready now for this hurricane season.”

State officials are urging residents to purchase flood insurance, saying “an inch of water in a small home can lead to more than $10,000 in losses.” The governor’s office is recommending families have at least a three days’ supply of bottled water, plenty of nonperishable food, extra batteries and either a battery-powered or hand crank radio to listen to emergency broadcasts.

The complete press release from the governor’s office, after the jump.

Virginians are at risk for the damaging effects of coastal and inland tropical storm systems and widespread flooding.  To emphasize the importance of preparing for hurricane season, Gov. Terry McAuliffe has recognized May 25-31 as Hurricane and Flooding Preparedness Week.

“As another hurricane seasons brings the risk of loss of life and property to Virginia, it is critical that we prepare to keep ourselves and our communities safe,” said Gov. McAuliffe. “As we saw in years past storms like Hurricane Sandy, Hurricane Irene and Tropical Storm Lee, these storms can result in tragic deaths and tremendous damage to homes and businesses. I hope every Virginian will take action and make use of the Hurricane Preparedness Tax Holiday to get ready for the storms that we know will come our way this year.”

Individuals and families should have an emergency kit of supplies, starting with three days’ of bottled water and non-perishable food; a battery-powered and/or hand-crank radio with extra batteries to hear emergency information.  Other items to include are flashlights and extra batteries, a first aid kit and an extra supply of prescription medicines.  A written family emergency plan is important as well.  For more information on making a family plan and putting together an emergency supply kit, go to www.ReadyVirginia.gov.

“It’s very common here in Virginia to have flooding during hurricane season.  If your homeowner’s insurance policy doesn’t include flood insurance, talk to your agent now about adding it,” said Jeff Stern, state coordinator of emergency management.  “You don’t have to live in a high risk area for flooding to affect you, and flood insurance is the best protection for your home and belongings.”

Just an inch of water in a small home can lead to more than $10,000 in losses; two inches of water in a mid-size home could cost $21,000 in damage and property loss.  Renters and business owners also can get flood insurance.  Typically, there’s a 30-day waiting period from the date of purchase before your policy goes into effect. See www.floodsmart.gov for details.

“The prediction of a below normal hurricane season should not be taken to mean Virginia won’t be impacted this year,” said Bill Sammler, NWS warning coordination meteorologist.  “Let’s all remember that it only takes one storm to cause severe damage and even loss of life.  Everyone should get ready now for this hurricane season.”

Virginia offers an annual Hurricane Preparedness Sales Tax Holiday every May 25-31 that provides people with an opportunity to buy emergency equipment and supplies tax-free.  All Virginia retailers participate in the holiday.  For more on the sales tax holiday, including a list of tax-exempt items, see www.vaemergency.gov.

In late August 2011, Hurricane Irene left millions of dollars in property damage in central Virginia and on the peninsulas and caused the second-highest level of power outages in Virginia history, affecting about 2.5 million people.  The storm also brought the fourth-highest level of storm surge in Virginia history and heavy rainfall that fell as far west as Interstate 81, measuring 15 inches in some locations.   In early September 2011, flash flooding from the remnants of Tropical Storm Lee displaced hundreds of residents from destroyed and heavily damaged homes and caused widespread damage to public property.