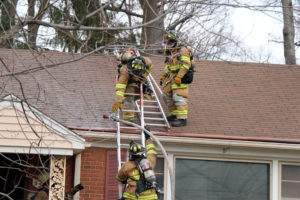 This morning, the Arlington Professional Firefighters and Paramedics Association (the IAFF Local 2800) issued a long, detailed statement on the need to staff Tower 104, which serves the Rosslyn-Ballston corridor, and Rescue 109, which serves Pentagon City and Columbia Pike, with four firefighters, as opposed to their current three-person staffs.

“Tower 104 and Rescue 109, with an ever-rising response area population, massive increase in high-rise square footage, terrorism threat, and other changing factors, require adequate staffing to safely and effectively carry out our assignments,” the Local 2800 writes. “The current staffing of three firefighters is woefully and dangerously inadequate.”

Rescue 109 was one of the first responders to the house fire in Nauck on March 15 that claimed two lives, and the firefighter who was injured fighting the blaze was on the three-person truck. He has not yet returned to duty, according to the Local 2800.

Tower 104 is a large fire truck with a ladder and “bucket” that puts firefighters into position, while Rescue 109 is a truck with no ladder that transports firefighters to emergency scenes, but comes equipped with tools for responding to car accidents and building collapses, according to Arlington County Fire Chief James Schwartz. Both trucks are staffed with firefighter/EMTs.

Schwartz said he has been advocating for four-person units for years, but he said budget constraints have prevented Tower 104 and Rescue 109 from joining the rest of the county’s fleet with four-person staffs.

“It’s been a longstanding position of mine and it has been advocated by the department for some time,” Schwartz told ARLnow.com this afternoon. “Obviously, the Board has to make policy decisions. I think they, too, would like to get to four-person staffing in each of the units. Sometimes the budget guidance is limiting in that regard.”

Schwartz said four-person staffing is not as simple as just hiring two more firefighters. Each additional firefighter on a truck is the equivalent of four full-time positions, to account for three eight-hour shifts a day and covering for vacation and sick leave.

“In order to achieve the safe staffing levels that we’re after, it would require us to hire eight new positions,” he said. “That’s not an insignificant budget issue. It’s doable, and I think the Board is supportive of this effort.”

Schwartz said years ago, only about half of Arlington’s fire trucks were manned by four-person crews, but the last time the county added staff to bring fire trucks up to four-person teams was in 2004.

Four-person trucks are not just the ideal position for the union, Schwartz said, but it’s also the national standard as dictated by the National Fire Protection Association and several other advocacy groups. Despite the fact that Tower 104 and Rescue 109 are assigned to some of the county’s most densely populated areas, the decision to leave specifically those two units undermanned was done after careful risk analysis.

“Almost every unit in the department is quite busy and has a level of responsibility that is not greater or lesser than any other unit in the system,” he said. “We have 14 suppression units in service every day. Twelve have four-person staffing, and those were selected based on judgments we make that have a lot to do with call activity, the kind of calls that units run. I have to make judgments based on the resources I’ve been allocated.”

Schwartz said the County Board gave County Manager Barbara Donnellan direction to “review all public safety staffing and to make a recommendation for FY 2016,” at a budget meeting last month. To the Local 2800, FY 2016 is already too late.

“It has been shown that increased staffing reduces firefighter injuries, thus reducing the amount of money paid by Arlington taxpayers to care for and backfill with overtime employees,” the union writes. “Tower 104 and Rescue109 are limited in being able to safely, quickly, and effectively perform… critical functions while understaffed with three firefighters… This is dangerous and unacceptable.”