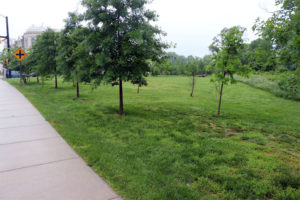 The Old Dominion Civic Association says it was “blindsided” by a plan to relocate a fire station to the neighborhood — a plan the association says amounts to the county “hijacking” green space.

The plan, to relocate Fire Station 8 from Lee Highway to a county-owned parcel of land on Old Dominion Drive near Marymount University, was included in Arlington County Manager Barbara Donnellan’s recommended Capital Improvement Plan. The plan (see pp. C-86 and C-88) also calls for the county’s Emergency Operations Center to be relocated from Courthouse to the new fire station site, and for an adjacent salt and mulch storage yard to be replaced and modernized.

The existing Emergency Operation Center is located in a building that’s set to be torn down to make way for the county’s Courthouse Square project and the salt storage yard, which serves snow removal crews in North Arlington, is past its useful life, according to the CIP. The fire station is set to be relocated from 4845 Lee Highway following a 2013 study that suggested the Old Dominion location would improve fire department response times in the area. 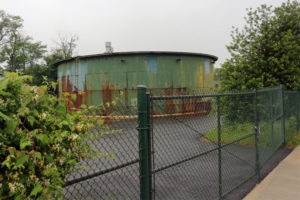 The Civic Association, however, is not pleased with the planned facilities, which they say will utilize a piece of currently unused land that they want to be turned into a park.

“When Arlington County published their Proposed FY 2015-2024 Capital Improvement Plan on May 13th, the residents of the Old Dominion and Donaldson Run Civic Associations, did not have a clue as to the green space ‘hijacking’ the County had in store for their residential neighborhoods,” an Old Dominion Civic Association representative told ARLnow.com via email.

A flyer is being sent to local residents, encouraging them to speak out in opposition to the plan.

“STOP THE DESTRUCTION OF OUR GREEN SPACE!” the flyer reads. “The proposed CIP calls for leveling of all the county-owned green space from 25th Street through the corner of 26th Street and Old Dominion… OPPOSE THE APPROVAL OF THE 25th/26th STREET OFFICE PARK AND FIRE STATION AND MAKE YOUR VOICES HEARD!”

Richard Lolich, president of the Old Dominion Citizens Association, said that there are lots of families with young children in the neighborhood.

“Because of this there is a real need for good park space for these children and families,” he said. “The County’s proposed location for the relocated fire station is on property that is ideal for a park in the neighborhood — the only neighborhood in Arlington currently without a dedicated park. We strongly feel that the County should address this issue before destroying green space in the middle of our neighborhood.”

The proposed site is within 2 miles of Potomac Overlook Regional Park and 1 mile of Greenbrier Park.

Anne Wilson, president of the adjacent Donaldson Run Civic Association, said her association doesn’t have a formal position on the county plan yet. Wilson said she has been aware of the county’s desire to build a fire station on the lot for more than a decade, and said planning funds were included in the CIP two years ago.

“The county never initiated the process with the neighborhood to discuss it further,” she said. “It seems to be more on the front burner than it was two years ago.”

Wilson agrees that many families in the neighborhood would like to see a playground or tot lot built in the area. She said she’s hopeful that a dialogue with the county will prove fruitful.

“This is a good example of something that’s going to take a long time under the Arlington Way,” she said. “It’s not always going to be pleasant, but the end result I’ve found is usually accepted by most folks, and that makes it worthwhile.”

The Old Dominion Civic Association, however, says it was “blind sided” by the plan.

“The majority of the civic association members present at our May 22nd meeting expressed great concern that the County had not reached out to the neighborhood and received input into this planned fire house and OEM relocation,” Lolich told ARLnow.com. “Most of those present felt that, although the Civic Association had been asking the County for several years to consider developing a park in our neighborhood, it seemed rather odd that they would now consider relocating the fire house and the OEM headquarters to a parcel of land that has been green space for several years.”

Should it be approved by the County Board, the CIP calls for a public input and design process for the new facilities to start in January 2015 and continue for at least a year. Construction on the salt facility is projected to start in July 2016 and end June 2017. Construction for the fire station and the Emergency Operations Center is projected to take place from fall 2017 to winter 2019.

The total cost of the facilities is estimated at $27.5 million, which will be funded entirely through county bonds. The buildings will total about 50,000 square feet of space and, combined with a staff parking lot, will occupy several acres of land.

Following the relocation of Fire Station 8, its site on Lee Highway may be used for affordable housing.

“The County will conduct a collaborative planning process for the land currently occupied by Fire Station 8 to potentially include affordable housing as envisioned in the Public Land for Public Good direction provided by the County Board,” the CIP says.