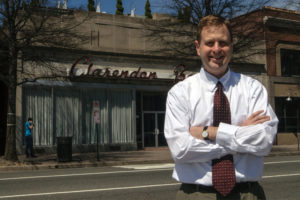 Arlington is my home. When my wife, Kristen, and I were looking for a place to raise a family, we sought out an area with strong schools, a vibrant community, and diverse neighborhoods. That’s what first drew us to Arlington County and Northern Virginia, and why we have chosen to raise our three daughters here, who attend Arlington’s public schools. I believe passionately in public service, which is why I’ve served on numerous boards and commissions trying to make our community an even better place to live. I was a Special Olympics coach for eight years, and chaired the Arlington Community Services Board for five, which dealt with mental illness, substance abuse, and developmental and intellectual disabilities.

Outside of my public service, I am a healthcare attorney, and have worked in healthcare policy for 20 years, first working on Capitol Hill and now with nonprofit doctors organizations’ to expand the access, coverage, and quality of healthcare. The Tea Party may see healthcare as a privilege, but I see it as a fundamental human right.

Since you elected me to the General Assembly in 2009, I have worked tirelessly to promote our progressive values. However, when I first arrived in Richmond, I was shocked to see even some Democrats voting for budgets that defunded our public schools and for redistricting plans that put Democrats in a permanent state of minority. That’s why I founded the Virginia Progressive Caucus — to hold Democrats voting like Republicans accountable. I have championed legislation focusing on issues ranging from disability rights to prison reform, and am now leading the fight to expand Medicaid in Virginia.

One thing I admire about Congressman Jim Moran is that we always know where he stands — I would be no different. I have outlined some of my top policy priorities below, but if you have any questions, feel free to contact me personally at [email protected].

There are many good Democrats in the race, and we would probably vote the same way most of the time. However, we need someone who will not just vote the right way, but who will be a loud, proud, and persuasive voice for our progressive values. We need someone who will shift the dialogue, and not be afraid to stand up for what they believe is right.