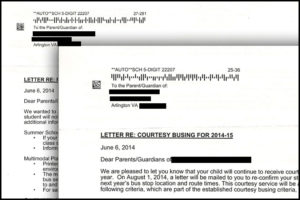 (Updated at 5:30 p.m.) Arlington Public Schools’ transportation department sent out its annual letter informing parents of their children’s bus status this past week, but many parents saw names of children they didn’t recognize.

That’s because of a processing error that used the wrong last name in letters to children slated to walk to school next year.

Another parent, Inger Moran, told ARLnow.com that she received a letter addressed to her daughter that also had an incorrect name, and found out on social media the problem was widespread.

“If they can’t do a simple mail merge then how can they manage bus routes?” Moran said in an email.

APS Assistant Superintendent for School and Community Relations Linda Erdos said the mistake was made in the process of a mail merge for one of four groups of students.

“We discovered this weekend that the mail house merge for the ‘walker’ letters pulled the last name from the wrong field on the data file,” Erdos told ARLnow.com. “This error only occurred with the walker letters — the other letters printed the name correctly.”

As a result, APS Transportation Services had to send out the following correction letter:

Last week we mailed letters to families about Transportation for the 2014-15 school year. We have learned that your student’s last name was not printed correctly and we apologize for the error. However, we wanted to confirm that your student is designated as a walker for next year, and all of the other information in the letter was correct.

If you have questions about transportation services, or if you believe your student may be eligible for courtesy bus service and would like to discuss that option, please contact the Transportation Call Center at 703-228-8670 weekdays between 6:00 a.m. and 6:00 p.m.

As for reports from some parents that one child in a household was granted courtesy bus transportation while another was designated a walker, Erdos said that courtesy bus service is offered on an as-available basis.

Courtesy busing was first offered in select areas last year for specific students whose parents requested it. It was approved for each student based on whether there was adequate space available on the bus. If the request could be accommodated, the transportation status for the student was changed manually in the student information system from Walker to Courtesy. So it is possible that a family could have requested courtesy service for one student last year and assumed that it would automatically be provided for a younger sibling this year. Unfortunately, that is not the case since staff have to go in and “override” the walker designation.

However, more importantly, this is why we have staff available to help through the Transportation Call Center (703-228-8670). If a student has been miscoded in the student information system, we want to know that now. The Call Center staff will be happy to work with families to resolve any issues so that when the letters with bus stops and times are mailed before the start of school, those inconsistencies will have been resolved.