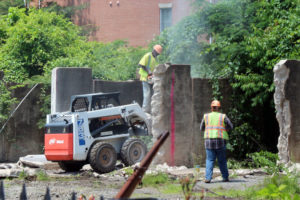 (Updated at 3:50 p.m.) The remaining section of the coal trestle from the old Washington & Old Dominion Railroad in East Falls Church could be given a historic district designation by Arlington County.

The trestle was partly on the property controlled by the NOVA Parks (formerly the Northern Virginia Regional Park Authority), and partly on 6873 Lee Highway, a plot of land owned by Robert Shreve Fuel Company, which demolished its section of the trestle last week to make room for a storage facility.

The County Board is scheduled to vote on whether to advertise public hearings on the trestle’s historic designation this coming Tuesday.

The staff report for the agenda item reveals that county staff “learned of the demolition as it was taking place the morning of June 5,” but discovered that Shreve Fuel did not require permits to conduction the work.

The county’s Historic Affairs and Landmark Review Board (HALRB) determined that the trestle was suitable for historic designation because it met four criteria:

The demolition took place following a May 21, 2014 meeting in which the HALRB voted in favor of a historic designation for the trestle.

Shreve Fuel agreed to give NOVA Parks the segment of track from the old railroad that was on top of the trestle for future “interpretation.” According to NOVA Parks Executive Director Paul Gilbert, about 75 percent of the trestle still stands and is on NOVA Parks land.

“Benjamin Elliott’s Coal Trestle retains sufficient historic, cultural, and physical integrity to be designated as a local historic district by Arlington County,” the staff report states. “Benjamin Elliott’s Coal Trestle was built in 1926 in the East Falls Church neighborhood. The utilitarian structure reflects the former industrial and commercial landscape that existed in the neighborhood. Such small-scale commercial coal trestles were instrumental in the processing of coal for local delivery to residences and businesses. This coal trestle is a visual reminder of a critical early-20th century energy infrastructure that fueled the electrification and development of Arlington County and the region. There are no other coal trestles extant within the County.”