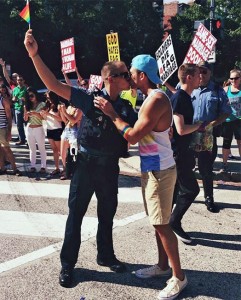 An Arlington County police officer has become a viral sensation after he was photographed, in uniform, kissing his boyfriend in front of Westboro Baptist Church protesters at the Capital Pride Parade earlier this month.

Officer D.J. Stalter was one of three Arlington officers participating in the parade when he was snapped holding a rainbow flag and smooching boyfriend Mark Raimondo along the parade route. That alone was not overly remarkable, but it was the background of the photo that helped it gain international attention: Westboro Baptist Church members can be seen behind Stalter and Raimondo, holding offensive signs decrying gay marriage and homosexuality.

ACPD Lt. Kip Malcolm, who was walking the parade route with Stalter, said the kiss, which took place near the intersection of New Hampshire Avenue and R Street NW, wasn’t necessarily meant to provoke the protesters. 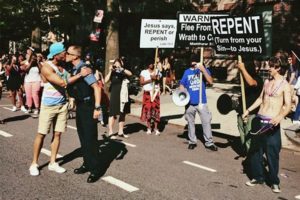 “A lot of people in the LGBT community thought it was defiance, but my thought it was more about affection and celebrating the moment,” he said. “The crowd cheered and they were excited to see that ability to display that affection. The fact that we’re in a day and age where a uniformed officer can walk in the parade hand and hand with his partner is a big step.”

Arlington County Police officials declined to say whether Stalter faced any reprimand or disciplinary action for the photo seen ’round the world, saying that it does not comment on personnel matters. But the department currently has no formal policy regarding public displays of affection.

“There hasn’t been any negative feedback for the department that I know of,” Malcolm said, of the photo. “Common sense would say be tactful and mindful, but I don’t think a kiss among two gay officers at a gay pride parade is too shocking. Just like a heterosexual couple out at dinner kissing is not something we’d frown upon.

Arlington Police Chief Doug Scott said he supports the department’s participation in the parade — it’s part of a larger LGBT outreach effort — but in the future he might seek to avoid photos of uniformed officers engaged in public displays of affection.

“Unequivocally, I have supported our participation… in the parade,” Scott told ARLnow.com. “I applaud the officers in our agency that want to participate in that way. The issue of the photo did raise some concerns…. do we need a policy of public displays of affection for officers in uniform?”

Scott said such photos “could affect the professional image of law enforcement” and there’s been “kind of an unwritten rule for some time” against PDA while in uniform. He said a review will be conducted to see if the department should codify that rule.

Regardless, Scott said he will continue to support the involvement of uniformed Arlington officers and police vehicles in the pride parade.

“I would just like to reemphasize the point that our agency is very progressive,” said Scott. “Our participation is one that I personally support, that the community supports and that our County Board supports.”