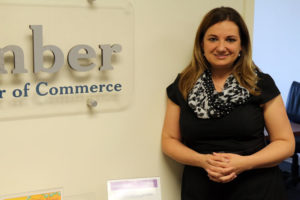 (Updated at 9:30 a.m.) New Arlington Chamber of Commerce President Kate Roche, 29, knows she will face questions about her age, but she and the Board of Directors that promoted her view it as an asset.

“My age is a positive,” Roche told ARLnow.com, days after her new promotion was announced. “It’s a change for the business community. When people traditionally think of business, they think of older men, not younger women. Appealing to more demographics makes it a more welcoming place.”

Roche replaces now-retired President Rich Doud, 71. Doud hired Roche as the chamber’s director of member services and development in 2007 after she worked at D.C. nonprofit Women in Government. Roche called Doud “a great mentor and leader,” and said Doud was in tears when they spoke last Friday after she was officially given the job.

The chamber’s Board of Directors Chairman Tim Hughes, an attorney in the Bean, Kinney and Korman law firm, said the search committee for a new president agreed that Roche’s youth was a good thing for the chamber in the midst of changing times.

“She has had just unparalleled enthusiasm, energy, passion and commitment,” Hughes said. “I would say that Kate brings a really interesting and intriguing mix of continuity and experience, along with obvious youth, energy and a change in the face of an organization.”

Roche said she’s focused on partnerships she’s already been building as vice president — her last position. That means working with the Ballston Business Improvement District, Arlington Economic Development and other business and community groups. Roche said leveraging those partnerships will allow the chamber to attract new members, a crucial mission in the changing economy.

“Chambers are being pushed harder to prove why people should join and to demonstrate their value,” Roche said. “There was a time when you joined the chamber just because that’s what you do.”

Hughes said that means attracting more of the tech businesses sprouting up seemingly every week in Arlington and enticing them to join the chamber.

“You think about the people starting businesses and developing software products doing all kinds of great and interesting things,” Hughes said. “We’re attracting these types of folks to the county, so they see why membership in the chamber helps them be effective in their business.”

Coming up, Roche plans to roll out a “Shop Chamber” initiative —  member businesses will encourage their customers to shop at other member businesses, with the chamber ultimately keeping track of how much additional money a business can earn from being a chamber member.

Roche said she’s also focused on retaining and engaging current businesses, which includes seeing which members haven’t been to a meeting or event in six months, and reaching out to them. She said the chamber should play a big role in helping local businesses, whether it’s via networking events or by helping to shape county policy.

“The chamber is the only all-county business organization,” she said. “The chamber’s role is to help businesses do business well. When business issues come up, we’re not part of the government, so we can do the lobbying that you can’t do if you’re a part of the county.”