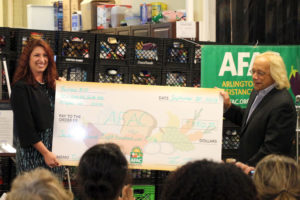 Arlington has fallen in a ranking of “most generous online cities,” but remains near the top of the heap.

Arlington is the 7th most-generous locality (with a population over 100,000) in the U.S. according to new rankings from Blackbaud, a software company dealing in fundraising solutions for nonprofits.

“Comparing the data is like comparing apples and oranges,” McGougan said.

The top 10 “most generous online cities” on this year’s list are: