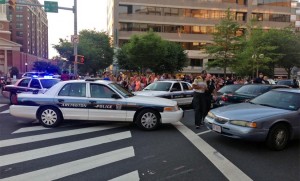 Over the weekend, during the All American Bar Crawl in Clarendon, an intoxicated Alexandria man in his early 20s stripped naked and led police on a chase that ended in a crash on Wilson Blvd.

It’s the latest high-profile police incident involving a bar crawl attendee in Arlington. In March a Reston woman allegedly showed up naked at the Arlington Magistrate’s Office and demanded that she be allowed to visit her husband, who was arrested earlier that day. Both had attended the St. Patrick’s Day-themed Shamrock Crawl, according to police.

The drunken antics of bar crawl attendees continue to irk residents of the neighborhoods around Clarendon. Some are calling for additional restrictions, or even an outright ban, on bar crawls. On the other hand, supporters say bar crawls are fun events that provide a social outlet for younger residents and a big boost for local businesses.

What, in your opinion, should Arlington policymakers do about bar crawls, if anything? (Assume that reducing the frequency of bar crawls is inclusive of any changes in police staffing you might support.)