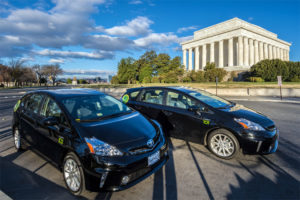 A new car service has launched in the D.C. area that bills itself as the “legal, green alternative to Uber and Lyft.”

Green Tomato Cars Co-founder and Vice President Jonny Goldstone said the car service launched in Arlington in May and has more than 25 cars in its fleet that are licensed to operate in Virginia, and he plans to add five to 10 more every month, as allowed by Virginia law for operating a car service as opposed to a taxi company.

“We’re looking at getting to 70 to 100 vehicles within the calendar year,” Goldstone told ARLnow.com. “With that sort of number, we’re pretty comfortable we’re going to be able to offer a car in 10 minutes wherever people are. At that point, I think we’re really a viable competitor to Uber for the on-demand rides. Right now we’re most convenient as a pre-scheduled ride service.”

Goldstone said Green Tomato has a “more intimate and personal relationship” with its drivers than Uber and Lyft, and all drivers either rent their cars — all black Prius Vs — from the company or can buy their own. Goldstone said all drivers go through a full criminal check, drug test, have their driving record for the last 10 years reviewed and have to go through a multi-layer interview process. 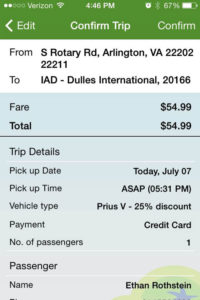 “About one in seven drivers get through the whole process,” he said. “There’s much more partnership between us and our ambassadors, which we call them because they’re representing the company.”

Green Tomato Cars launched in London in 2006 and is also launching in Paris in the near future. The D.C. area is its first market in the U.S.

Green Tomato charges customers for distance, not time, Goldstone said, except for a $5 rush hour surcharge to account for traffic. A trip from the Pentagon to Dulles International Airport costs $54.99, according to the in-app rate, and from Rosslyn to the Columbia Heights neighborhood of D.C. costs $29.99.

In addition to the app, customers can book trips online and over the phone. Goldstone said each car is equipped with free WiFi for the customers.

While Green Tomato boasts its regulatory approval to operate in D.C.’s Virginia suburbs, Uber and Lyft have submitted requests to the Virginia Department of Motor Vehicles requesting “temporary operating authority” and a broker’s license, which will “go through the proper channels” to determine if the two ridesharing services can legally operate in the state, a DMV official told ARLnow.com last week.

Goldstone said that even though Green Tomato is a licensed operator, and he believes “everyone is a little bit in the wrong” in the fight between Uber, Lyft and the DMV, that doesn’t mean Green Tomato is without worry.

“There is a concern that even as a legitimate operator, we are still going to be targeted, especially by D.C. regulators,” he said. “The Virginia regulators are perhaps more aware of what we’re doing, but the D.C. regulations are so unclear that it’s going to be difficult.”