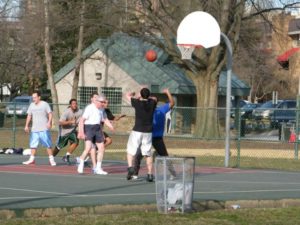 (Updated at 3:45 p.m.) The Arlington County Board could approve nearly $2 million worth of renovations to Virginia Highlands Park near Pentagon City at its meeting this weekend.

The improvements are part of the county’s ongoing effort to completely renovate the recreation facilities at Virginia Highlands (1600 S. Hayes Street), which are some of the busiest recreation areas in the county. Within the last 10 years, the synthetic turf field, playground, restrooms, athletic field lighting and spraygrounds have all been either renovated or constructed.

In addition to new tennis courts — which will replace existing courts that were recently resurfaced — the renovations call for new covered waiting areas outside the courts, along with a drinking fountain and an “information kiosk.” 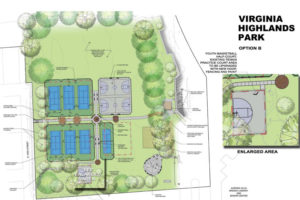 The junior basketball court will replace the tennis practice courts to the south of the six tennis courts. The court was requested during public input meetings last fall. The community lamented that there was no basketball space to be used specifically by young children.

The basketball courts will be relocated to the north of the current courts.

“Several community members expressed concerns about the proximity of the existing basketball courts relative to the playground area,” county staff said in a report, explaining the relocation.