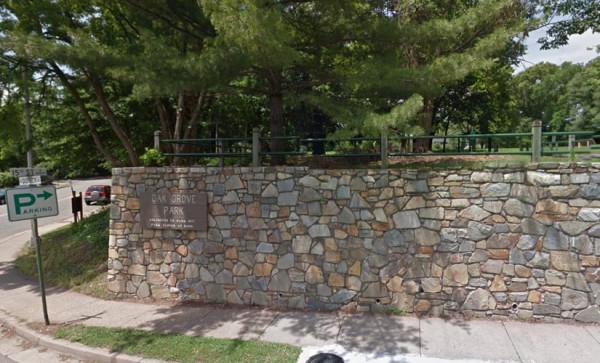 Oakgrove Park (1606 N. Quincy Street) is slated to get a new entrance, a new trail and other features.

The park, at the southern edge of the Cherrydale neighborhood, has a bit of a visibility problem — it’s not very noticeable from street level. A new entry feature is designed to help, with an artificial, metal tree holding a sculpture of an owl and a sign that says “Oakgrove Park.”

The Arlington County Board is scheduled to vote on a contract for $488,915 with a $48,891 contingency to construct the new entrance on 17th Street N. along with a new circular walking/jogging path on the park’s perimeter, benches, bleachers and bike racks.

The 3.51-acre park’s grass field is planned to be replaced in a separate project, and that work brings the total cost to Oakgrove Park improvements to about $680,000, paid for with 2012 and 2014 pay-as-you-go funds.

The new entrance will give park visitors increased access to the gazebo and “tot lot,” and will have improved ADA (Americans with Disabilities Act) accessibility to the walking trail. There are several mature trees lining the perimeter of the park, and Arlington County Parks and Recreation staff said in their staff report that the trail was designed to have minimal impact to the existing trees.