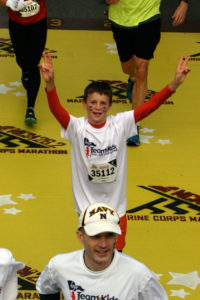 A Shuttleworth ran and won last month. But it wasn’t Bruce and it wasn’t a political race. It was his son, Bowen, running in the Virginia Hershey Track and Field state championship and reportedly capturing the fastest 400 meter time in the southeastern United States.

Bowen, a 12-year-old rising seventh-grader at Williamsburg Middle School, finished the 400-meter dash in 1:04.52, almost a full four seconds ahead of the second place runner at the event. The time was the fastest in the U.S. Southeast, according to Bruce Shuttleworth, and qualified him for a spot in the Hershey’s North American Championship on Aug. 2 in Hershey, Pa.

It wasn’t the only time Bowen has found the top of the podium at the state championships. He teamed with his twin brother, Reece, and fellow Arlington pre-teens George Brown and Sean Conley, to take home the 4×100-meter relay title in 55.84 seconds, again almost a full four seconds before the next closest team. In 2010, as a 10-year-old, Bowen Shuttleworth won the 100-meter dash at the same meet.

It’s the 37th running of the Hershey’s North American championships, but, according to Bruce Shuttleworth, Bowen is the first ever runner from Arlington to qualify. Boys and girls between ages 9 and 14 are eligible to compete, with age groups divided between 9 and 10 year olds, 11 and 12 year olds and 13 and 14 year olds.