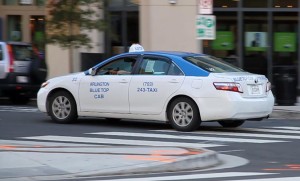 The suit, filed in Fairfax County Circuit Court, requests the judge issue an injunction that would prevent the ride sharing companies from operating in Virginia without a broker’s license. The DMV has issued “cease and desist” orders against the two ride-sharing companies, but they have continued to operate in the state.

“The primary concern of Arlington Blue Top Cabs is the safety of our passengers and driver,” Arlington Blue Top Cabs Vice President John Massoud told ARLnow.com through a spokesperson. “Companies such as Uber and Lyft have proven their lack of concern for these people by not requiring adequate insurance and background checks. That’s why we filed this complaint in Fairfax Circuit Court.”

Taxi drivers have mounted protests against Uber and Lyft in recent months, and before that were protesting cab companies for “unfair working conditions,” and requesting Arlington enact a “driver’s bill of rights.”

During the legal disputes, Uber and Lyft have maintained service to Northern Virgina — Uber is even expanding farther out into the outskirts of Northern Virginia — as local police, including the Arlington County Police Department, have committed to upholding the DMV’s cease-and-desist order by ticketing drivers.

Uber and Lyft have combined to raise hundreds of millions of dollars in venture capital as they expand to more cities nationwide and internationally. Uber launched in the D.C. area last summer.