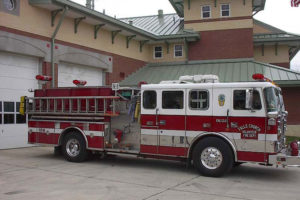 The station is located in Arlington but the land and building are owned by the City of Falls Church. According to the county staff report, half of the station’s coverage area is in Falls Church, while the other half is in Arlington. The partnership contract between the two jurisdictions had not been updated since it was passed in 1989; the new agreement the Board approved on Saturday would replace the former contract.

“The new Fire and Emergency Medical Services Agreement between Arlington County and the City of Falls Church is a much-needed update to an agreement that dates back to 1989,” County Manager Barbara Donnellan said in an email. “This new agreement better serves both communities, by more clearly defining  operations and cost-sharing, and taking into account how service delivery has changed since 1989.”

The new agreement calls for three more full-time equivalent positions, for which the county and city will split expenditures. Despite the new purchases and new positions, county staff doesn’t anticipate any additional “net tax support.”

The old agreement, staff writes, did not clearly define how costs for maintenance and replacement of outdated equipment would be split between the two jurisdictions. In the first year of the new agreement, Falls Church has agreed to pay for capital improvements to the station to “bring the facility to an acceptable operating baseline.” The county has agreed to be responsible for maintenance and the city will fund all capital improvements going forward.

The city will pay the county $150,000 a year for capital investments, which the county will manage, and $738,000 for the initial improvements, which include replacing windows, overhead doors, and HVAC design.