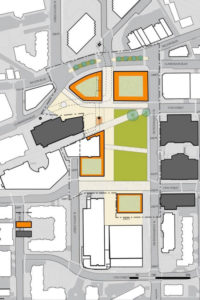 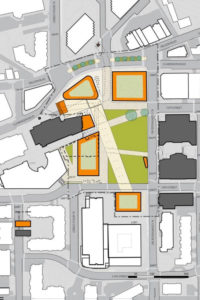 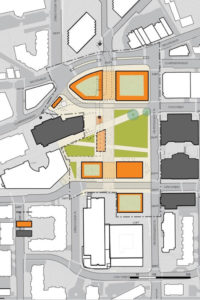 (Updated at 2:10 p.m.) The large surface parking lot between the Arlington County Justice Center and Courthouse Plaza appears destined to become open, green space at some point in the future.

Last night, county planners presented three concepts to the community as part of the Envision Courthouse Square outreach process. All of the concepts included using the space the surface parking lot occupies as a sort of town green, with pedestrian and bicycle paths crisscrossing the area in different patterns.

The workshop last night was the last in-person chance the community will have for significant input before staff from Arlington’s Department of Community Planning, Housing and Development drafts a Courthouse Sector Plan Addendum, to be brought before the community in the fall and presented to the Arlington County Board this winter.

Moving forward, the county will plan on placing parking underground while “retaining minimal surface parking,” according to CPHD Principal Urban Designer and Planner Jason Beske. There are no plans for buildings on the north edge of the current parking lot to preserve the square, and 14th Street and 15th Street between Courthouse Road and N. Uhle Street will both remain open to vehicular traffic.

Three “big ideas” were brought before those in attendance, which included the Envision Courthouse Square Working Group and county staff. The first, Concept A, calls for 3.9 acres of open space, a pedestrian promenade connecting 15th and 14th Streets N. in front of the AMC Courthouse movie theater and converts 15th Street between N. Courthouse Road and Clarendon Blvd into a shared pedestrian, bike and vehicle corridor.

Concept B, pictured above in the center, calls for the pedestrian promenade to be diagonal from the current Strayer Building — viewed as a target for high-rise redevelopment — to the Verizon Plaza building adjacent to the building that contains the Gold’s Gym. This plan calls for 4.2 acres of open space and includes a pocket park between Courthouse Plaza and N. Veitch Street.

Concept C, pictured above on the right, calls for 3.15 acres of open space and a more east-west alignment of paths and streets in the design area.

The plans for building redevelopment vary significantly among the three plans. Concept A calls for the two buildings with 15th Street frontages to be redeveloped at heights of 153-180 feet for the Strayer building — at the intersection with Clarendon Blvd — and 300 feet for the Landmark Block, at the intersection of with Courthouse Road. It also calls for retail in front of the AMC theater and a new building up to 180 feet tall next to it.

Concept B flips the proposed heights for the Strayer and Landmark blocks from Concept A, calls for the redevelopment of the AMC theater into a county or private building up to 180 feet tall and a three-to-five story “cultural building” at the Verizon Plaza site.

Concept C includes the most significant redevelopment: a “market shed” next to the AMC theater, the same proposed heights for the Strayer and Landmark block and two, 10-12 story buildings along 14th Street N., with the option to preserve the current theater or include a separate cultural use. The Verizon Plaza would be the site for a new, 300-foot high-rise building.

“Think of these plans as a kit-of-parts,” CPHD staff wrote in its presentation last night. “All of the big ideas are open for your feedback. Feedback results will inform us of the community’s preferences as we take the next steps to combine ideas and test their feasibility. The goal is to create a single, preferred plan that carries our shared vision forward.”

CPHD officials said an online survey will be posted shortly for community members unable to attend last night to weigh in on the three concepts.