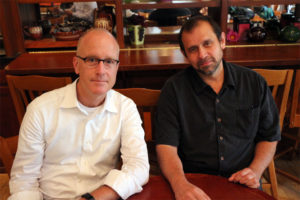 SailMinder, like many startups, came from an idea to make its co-founders’ lives easier. CEO John Stauffer, Chief Technology Officer Hashem Fouad and Chief Creative Officer Robert Cooper have come up with a way to make internet research based more on human input and less on search engines.

The three came together in September 2012 with a common problem: all of their jobs required gobs of research from different sources around the internet, but none of them were satisfied with the way they could look for reliable information and organize it.

Stauffer works as a social media strategist for Ogilvy & Mather and needed to research “a big topic for a big client,” Cooper told ARLnow.com. Cooper, a former co-worker of Stauffer’s, had been designing products as a consultant and was itching to start something new. Fouad had just developed emotion detection software that can adapt training methods based on participants’ emotional responses, as part of a contract with the Office of Naval Research (ONR).

The ONR passed on the project — “it was a little too out there,” Fouad said — but he had told Cooper about it just days after Stauffer and Cooper had chatted over coffee. The three decided to team up and form a new company designed to help “knowledge workers,” as they call themselves, with research.

“We wanted to make some next-generation learning software,” Cooper said.

Cooper, Stauffer and Fouad designed an idea to create a browser plug-in that allows the user to “like” or file an article, then the plug-in automatically categorizes that article and sorts it. The more users that install the plug-in and use it, the more powerful a tool it becomes, recommending new articles on relevant topics, dividing topics into sub-categories and organizing articles based on how highly recommended they are. 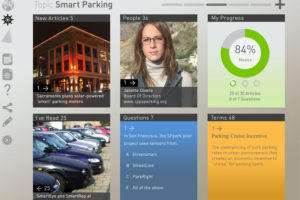 “The more you interact with it, the more refined the search becomes,” Cooper said. “It’s like we’re giving the internet a mind of its own.”

Fouad, a consultant and game programming professor at Rosslyn’s Art Institute who said he’s constantly looking to build new products like 3-D sound systems, finished the prototype in April and the product is patent pending.

“I spent 40 to 60 percent of my time on projects just finding good information,” Fouad said. “It’s a problem knowledge workers have. There’s no technology that really outlines a quality source. The best tool for this is the human brain. So humans tell us what is good, and we have a machine learning system that lays it out on a topical landscape. Then it will tell you what topics are relevant in your neighborhood of research.”

“It depends on a crowd of users populating the system,” Fouad continued. “It’s a very powerful idea.”

Not only does the product categorize topics and recommend articles for research, but it tracks the user’s “learning” progress. It rates them on a percentage of expertise based on the amount and variety of sources they have read. It can develop quizzes and show who else is researching a similar topic.

SailMinder is developing the consumer-facing product as a free tool for everyone. Stauffer, Cooper and Fouad said they plan to generate revenue by giving private companies access to its application programming interface (API) and developing an “enterprise version.” The free tool populates the product and makes it more powerful, while the API provides companies access. 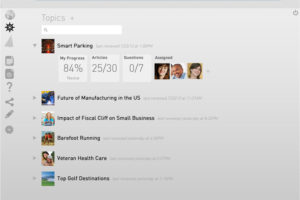 “We can do both of these at the same time because they’re complementary,” Fouad said.

The prototype works as designed, but the product that would be rolled out to the world is some time away. SailMinder is seeking a $250,000 round of seed funding — they already have secured some investment from an Apple engineer, Cooper said — which would launch development of the beta product. Once the funding round is complete, Cooper and Fouad estimate the beta would take nine months to develop, and the full product will have a significant population to work with nine months after that.

The SailMinder team is in consideration for funding from Courthouse-based intelligence incubator In-Q-Tel. The co-founders have confidence that the tool is a revolutionary idea, based on the support and feedback they’ve gotten from their advisers and experts in the field.

“Subject matter experts didn’t think it was crazy, so that was a good sign,” Fouad said. “They can see what we’re doing, which is basically turning on the spigot of knowledge to the world.”