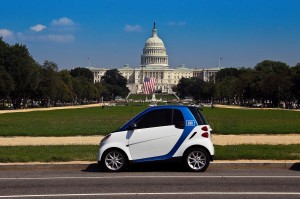 The Crystal City Business Improvement District announced today that the carsharing service would be launching in Crystal City in the coming weeks. It allows users to park their borrowed car anywhere in the “home area” and find an available car via a GPS-enabled smartphone app.

The service costs $35 to register and 41 cents per minute, with a $14.99 per hour and $84.99 per day maximum. The car’s insurance, gas and parking fees are free (in the home areas), and car2go says it has hundreds of cars in the D.C. area. They can be driven anywhere as long as the user finishes his or her trip within the “home area.”

Crystal City is the first home area outside of the District for car2go D.C., and will offer at least four car2go spaces at the launch of the program. According to the Crystal City BID, any of the service’s 33,000 members may use the cars. The service will be the second carsharing option in the area, in addition to Zipcar.

Crystal City BID President and CEO Angela Fox boasted about the new service and hopes it spreads to other areas of the county.

“We sought it out but hope and expect they will launch in other nearby neighborhoods ASAP, because that makes the whole system more robust. The more options, the better,” Fox said. “Car2go is very popular, and we wants its users to know that they can get to and from Crystal City with ease.”