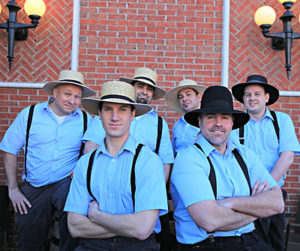 It’s not every day you can dance along to the sounds of a bunch of Amish men singing Lady Gaga or rapping a Jay Z song. But that’s exactly what can happen if you see the Amish Outlaws during Rock at the Row on Thursday (August 7).

The group has its full story on its website, chronicling how it all started with some of the original members meeting after “Rumspringa.” That’s the Amish practice of letting 16-year-old children live without the Amish code of conduct to decide if they want to be baptized into the church. Although most youths return to the Amish lifestyle after Rumspringa, the guys from The Amish Outlaws did not.

The band is made up of former Amish and “Honorary Amish” members: Brother Amos Def, Brother Big Daddy Abel, Brother Eazy Ezekiel, Brother Elijah Rule, Brother Hezekiah X and Brother Jakob the Pipe Layer. All of their shows reportedly are different. Sometimes the band members will rock out to Bon Jovi or Foo Fighters, and other times they’ll bring out the country with Johnny Cash. The group’s website says that throughout each show, The Outlaws “spin yarns about the Brothers’ upbringing and adventures since Rumpsringa.”