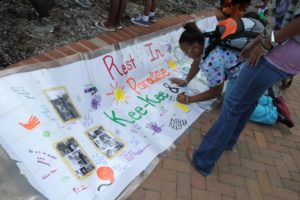 Tonight, the residents of the Hall’s Hill neighborhood will hold a “peace walk” in memory of two residents who were killed two years ago in a double homicide.

From 7:00 to 9:00 p.m., starting at 1945 N. Dinwiddie Street, members of the community will gather to remember Carl Moten and Keefe Spriggs, who were found murdered in an apartment on the 1900 block of N. Culpeper Street on Aug. 7, 2012. The crime is still unsolved, but according to Arlington County Police Department spokesman Dustin Sternbeck, it’s still an active investigation.

Moten, known as “Pooh Bear,” and Spriggs, known as “Kee Kee” to friends and family, were born and raised in Hall’s Hill. Moten worked as a cook in Falls Church and was 31 years old at the time of the incident. Spriggs, 59 when he was killed, worked at a body shop. This is the second annual walk to raise awareness of the crimes.

ACPD will have a presence during the walk, Sternbeck said, and continues to encourage anyone who has information about the crime to come forward.

“It’s important to get this back out there and visible to the public because the smallest piece of new information given to the detectives could be the big break in the case,” Sternbeck said. He added the department “has been working with both families throughout this whole thing in an attempt to find the killer.”