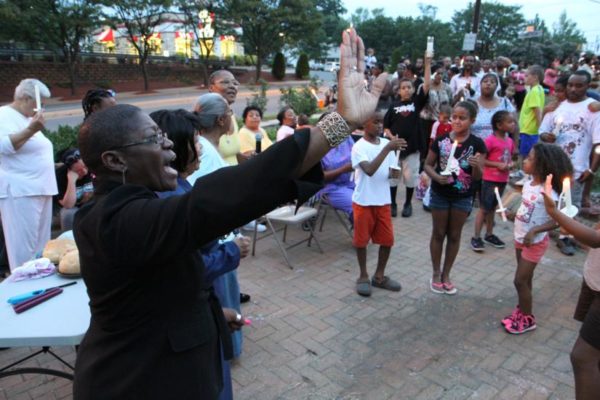 Through song, prayer and poetry, the Hall’s Hill community came together Tuesday night to mourn the loss of two of its own.

A candlelight vigil was held for double homicide victims Keefe Spriggs and Carl Moten at the Hall’s Hill/High View Park Memorial Garden. Dozens of people young and old — including friends, family and neighbors of the victims — attended the somber vigil, which was organized in part by the Calloway United Methodist Church (5000 Lee Highway). Speakers included pastors and community members.

On the morning of August 7, 59-year-old Spriggs and 31-year-old Moten were found murdered in an apartment on the 1900 block of N. Culpeper Street, in Hall’s Hill — the neighborhood in which they were both born and raised. So far, police have not released any additional information regarding the ongoing investigation into the homicides.

Spriggs, known as Kee-Kee to friends and family, was divorced and was working at a body shop. Moten, also known as Pooh Bear, was an acquaintance of Spriggs and had been working as a cook at a restaurant in Falls Church.

“Both of these families are families of faith, families of character,” she said. “These people exemplify what it means to be a close knit community.”

Rev. Oliver said it has been more than a decade since a crime like this has happened in the area.

“This is just shocking, it’s a shocking thing to have happen,” she said. “I’ve heard over and over again: things like this just don’t happen in Hall’s Hill.”

“When one of us hurts, all of us hurt, because we’re all related,” she told the gathered crowd. “We’re related by blood or we’re related by the Spirit. I like the feeling of family that this community exhibits all the time. You feel the love and the presence of God here.”

The families of both men are “not strangers to loss,” Rev. Oliver said. Spriggs’ mother had previously lost a son to a motorcycle accident and another son to an illness, she said.

The funeral for Spriggs was held on Tuesday. Moten’s funeral will be held at Mt. Olive Baptist Church in the Arlington View neighborhood on Thursday.

Rev. Oliver said Arlington County Police have been responsive to the community during the investigation into the homicides.

“We have faith that they are working diligently and trying to piece everything together,” she said. “I think the community will rejoice when we have an answer. We would just like to know who and why.”

In the meantime, she said, the “outpouring of love from the community” has been helping the families of Spriggs and Moten cope with their loss.