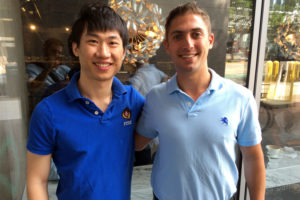 Last year, Ryo Hang had an idea for an app that gives its users prizes for competing and winning contests with one another. The Shanghai, China, native thought he had a good idea, but he was missing something.

“I wanted to reward people for doing something, but I didn’t know how to monetize that,” Hang said.

At the same time, Jacob Perler, working for Deloitte in Rosslyn, wanted to start his own technology business, but needed a developer. The two found each other on CoFoundersLab, met for coffee at the Barnes & Noble in Clarendon and, a few months later, launched Snaapiq.

In that initial meeting, and in several subsequent get-togethers, the two co-founders decided that they would focus on creating photo contests — which they call “adventures” — with the winner getting prizes. Perler came up with the idea of having companies sponsor the contests and the prizes, essentially turning Snaapiq into a combined contest/marketing platform. 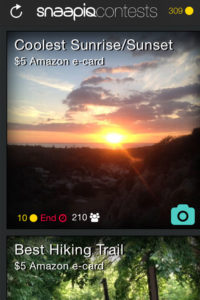 “Ryo was very adamant about gameification and rewarding people for accomplishing tasks,” Perler said. “As we spoke about it, we landed on pictures and thought people would like to get prizes for their pictures.”

After five months, Hang and Perler launched a bare-bones app in the iTunes App Store. Perler lives in Rosslyn, where the company is based, and Hang lives in Sterling, Va., so they tend to work separately, although they have a membership to D.C.’s WeWork. When they sat down to coffee with ARLnow.com last week, Perler said they two hadn’t “seen each other in a couple of weeks,” but that hasn’t stopped them from being strong collaborators.

“Working together like this is helping build the company culture, which will be key to our success,” Perler said.

Snaapiq users upload photos for different adventures, like “coolest sunset” or “best hiking trail,” and Snaapiq’s algorithms rate each picture on a variety of metrics, including picture ratings in the app, and awards a prize to the winner. Snaapiq runs multiple contests a day and some of the prizes are worth more than $100.

About 90 percent of the contests on Snaapiq are sponsored by the company at the moment, with 10 percent coming from outside brands like D.C.’s Lindy Promotions and Urban Stems. The app has been downloaded about 20,000 times so far, and Perler said there have been more than 50,000 adventure uploads on the app. With a redesign coming in the next few weeks, he and Wang expect the number of users on the app to hit 100,000 within the next six months. 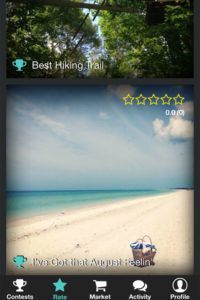 By that time, Perler said, Snaapiq should be generating revenue. They are in the middle of raising a $300,000 seed funding round, and Perler said they’re in discussion with angel firms and venture capitalists in D.C. and New York.

“A lot of people are excited, especially by our early traction after being completely bootstrapped,” Perler said. “In a year or two, we think we’ll be really taking off. We offer a unique compound value for advertising.”

Companies will want to work with Snaapiq, Perler says, because “every business runs contests all throughout the year.” And the contests that Snaapiq sponsors are worth spending the money on, Hang says, because “we’re giving away prizes, but we’re getting customers when we do.”

Despite the fact that brands are already running contests on their own on free sites like Twitter and Facebook, Snaapiq offers “native engagement,” according to Perler.

Brands can also use the winning picture in promotional materials, but a picture can’t be used if the user doesn’t win the contest, according to Snaapiq’s terms of service. When someone wins a contest, they’re more willing to engage anyway.

“One user won $250, which is a significant amount of money for a lot of people,” Perler said. “She emailed me a dozen pictures and posted about it on Facebook. $100 is an incredible amount to some people, so we think it’s a selling point as well as a social good.”