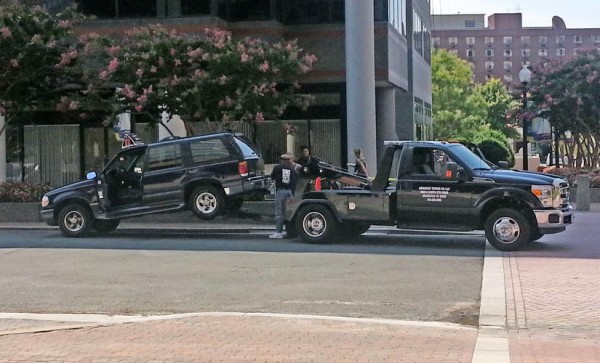 It took less than a minute, according to the witness who snapped the photo, above, last week.

An SUV with a Jimmy John’s delivery sign on the top pulls into the private parking area of an Arlington office building around noon. The delivery guy quickly makes his way to the lobby, dropping off a sandwich for a hungry cubicle dweller and hoping for a buck or two in return as a tip.

During the brief moments the delivery guy is inside, a tow truck from Ballston-based Advanced Towing swoops in, hooks the rear tires of the SUV and begins to drive off. The delivery guy is able to flag down the tow driver at the last second and pay the $25 “drop fee,” thus avoiding the $135 it would have cost to get his SUV back had it been impounded.

The witness is sympathetic to the delivery driver — “I worked in that industry in college and its already
hard enough to make money off tips” — and seems to think that this is an instance of a private towing company going rogue. It’s not. According to an Advanced employee, it’s legal and actually fairly common.

“In Arlington… we probably tow a delivery vehicle from just about every major food delivery business in the area at some point in time,” Paul Anderson, an administrative employee for Advanced Towing, told ARLnow.com. “There is no exemption for delivery vehicles… unless property owners ask for those to be exempted.”

In other words, if you park without authorization on private property — even if you’re delivering food, you leave your flashers on, go inside for just a few seconds, etc. — you can be towed. That is, unless the building owner specifically asks for an exemption.

Anderson said Advanced only “occasionally” gets complaints about towing delivery drivers. When they do, an employee explains ” that they were parked in an area they were not allowed to [park].”

So why would an office building owner want the poor fellow delivering sandwiches, pizza or Chinese food to one of the building’s occupants to be towed? Sometimes, Anderson said, it comes down to security — it wouldn’t be hard for someone with nefarious intentions to put a fake delivery sign on the roof of their car.

“Especially commercial buildings with government agencies, sometimes it’s a security issue,” he said. Given the number of government buildings in Arlington County, Anderson said Advanced has had meetings with the U.S. Dept. of Homeland Security to discuss that very issue.