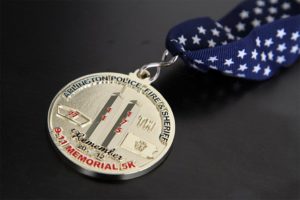 The 13th anniversary of the Sept. 11 attacks will again be marked in Arlington by, among other events, two 5K races raising money for charities.

First, on Saturday, Sept. 6, will be the Arlington Police, Fire and Sheriff Memorial 9/11 5K. The race will begin at 6:00 p.m. and start and end at the Double Tree hotel in Crystal City at 300 Army Navy Drive.

The race is $40 to register and participate, with the proceeds going to the National Fallen Firefighters Foundation, Segs4Vets, Team Rubicon and T.A.P.S (Tragedy Assistance Program for Survivors). The race is limited to the first 4,500 registrants.

The course will take runners from the Double Tree up S. Joyce Street, by the Air Force Memorial and Pentagon 9/11 Memorial, around the Pentagon before returning back to the Double Tree.

A week later, the 9/11 Heroes Run with kick off just a few blocks away. Starting at 8:30 a.m. on 23rd Street S., between Fern and Eads Streets, the run raises money for the Travis Manion Foundation, a charity that supports “veterans, their families, and families of fallen service members.”

Registration for the Heroes Run is $35, plus a $2.74 service fee. The Arlington race is one of 47 nationwide that will be run this year, including events in New York City, Philadelphia and Richmond. Only those who register before Sept. 1 are guaranteed a race shirt and memorabilia.