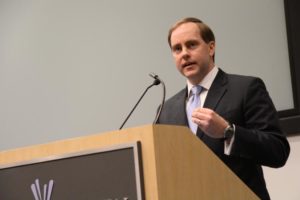 (Updated at 10:55 a.m.) Alan Howze, the Democratic candidate for the Arlington County Board, has announced a new platform to improve the planned Columbia Pike and Crystal City streetcar.

“The streetcar has been used as a wedge issue by those who seek political gain by dividing our community,” Howze said in a press release. “Rather than use the streetcar to score political points, let’s focus on responding to community questions and using innovation to make the planned streetcar even better.”

After “talking to thousands of Arlington residents at their doors,” Howze created five proposals to improve the streetcar system. The proposals are:

County Board member John Vihstadt is Howze’s opponent in the November general election. It’s a rematch of their April primary in which Vihstadt, a Republican-endorsed independent, won by a 57-41 percent margin. In response to Howze’s statement, Vihstadt responded in a press release, saying “Let’s be careful about who is calling whom divisive.”

“We have a strong contingent of voters who oppose streetcars, and are ready to vote in November,” said Vihstadt, who voted, along with County Board member Libby Garvey against the county’s 10-year Capital Improvement Plan last month because it included the streetcar.

“I’m glad to learn that my opponent is hearing the same concerns that I am in door-knocking and listening to constituents up and down Columbia Pike, along Route 1 and across the County,” Vihstadt said, “including deep anxiety about construction time and cost, disruption to small businesses, commuters and residents alike, unsightly and potentially unsafe overhead wires, environmental and energy concerns and more. Unlike my opponent, I believe that the way to deal most effectively with these concerns is not to build the streetcar in the first place!”

Howze compared the debate over the streetcar to the 1960s debate over building Metro’s Orange Line underground instead of in the median of I-66, saying “for 50 years, transit opponents have used the call for more buses to attempt to block the expansion of rail transit.”

Vihstadt fired back to that claim, referencing the vote Arlington residents took to approve building the Metro along the Rosslyn-Ballston corridor.

“My opponent’s references to Metro are inaccurate,” he said. “I support and take Metro every day. The fact is that Metro was put to a vote in the late 1960s and Arlingtonians embraced it. They have voted to continue to support Metro in bond votes nearly every two years since. Metro ties our entire region together across Maryland, the District and Virginia. None of this is — or ever will be — true of a streetcar.”