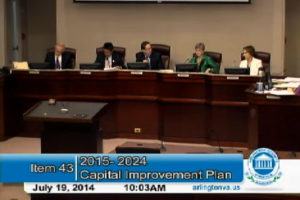 The Arlington County Board has approved a plan for $2.7 billion in infrastructure spending — including $485 million for the Columbia Pike and Crystal City streetcar system — over the next 10 years.

Though controversial, the streetcar was just one component of the approved Capital Improvement Plan. The Board also gave a thumbs up to the School Board’s capital plan, a $534 million spending agenda over the next 10 years that includes a $105.8 million bond request that will be put to voters as a referendum.

The school bond will be placed on the Nov. 4 ballot along with $60.24 million for Metro and transportation, $39.9 million for community infrastructure and $13 million for parks and recreation. The county asked the Circuit Court to place its $219 million bond package on the ballot on Saturday, after the meeting, according to the Sun Gazette.

The streetcar was the main impetus behind County Board members John Vihstadt and Libby Garvey’s “no” votes, but the CIP passed 3-2 with Chair Jay Fisette, Vice Chair Mary Hynes and Board member Walter Tejada voting for approval. None of the $485 million in streetcar funds will come from local residential taxes; instead, it will be funded by a mix of state dollars and dedicated transportation funds.

“Regardless of the mix of federal state or local funds, it’s the public’s money after all, and it’s an unwise public expenditure regardless of where the streetcar is,” Vihstadt said. “I cannot vote for a CIP whose single biggest legacy from a funding share standpoint will be a financial and operational albatross for decades to come.”

In addition to the bond referenda, the CIP includes an estimated $28 million for reconstruction the Lubber Run Community Center, expected to occur in 2017-2018. It pledges $1.1 billion to the Metro system over the next 10 years and $25.1 million for a new Fire Station 8 and Office of Emergency Management operations center, the site for which has yet to be determined.

“This CIP reflects the values and goals of our community,” Fisette said in a press release. “The Board’s adoption of this plan comes after months of dialogue with Arlingtonians. Together, we’ve produced a balanced plan that maintains our existing infrastructure and makes strategic investments in our future. This is a prudent, financially sustainable plan that will meet the needs of our growing community and help maintain our triple-Aaa bond ratings.”

The changes the Board made to County Manager Barbara Donnellan’s proposed CIP were largely schedule-based. The Board elected to accelerate $1.4 million renovations to Tyrol Hills Park and $1.5 million for the Aurora Hills Community Center. Both projects are now scheduled to begin design and planning phases next year.