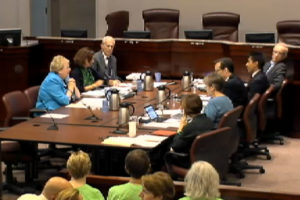 (Updated at 5:55 p.m.) The Arlington County Board appears likely to vote on a $333 million plan to build the Columbia Pike streetcar system on Saturday.

County Manager Barbara Donnellan presented an alternative streetcar funding plan to the Board this afternoon, one that includes no federal funding, accelerates the project’s schedule by a year and slashes the estimated budget by $25 million.

Board members Libby Garvey and John Vihstadt, the County Board’s two streetcar opponents, grilled county Transportation Director Dennis Leach and other county staff about the reliability of state funds and the county’s projections. Virginia Secretary of Transportation Aubrey Layne announced last week that the state would contribute up to $65 million to the project.

“I was just trying to figure out how sure this money is,” Garvey is, noting words like “anticipate” and “up to” in Layne’s letter. “It seems like you’re very sure about it but it doesn’t sound like you can take it to the bank.”

County Board Chair Jay Fisette issued a strong rebuttal to the concerns, claiming that in his nearly two decades on the County Board, “the state funding in this plan is the most reliable state transportation funding we’ve ever had.”

Fisette and Board members Mary Hynes and Walter Tejada voted to place the alternative funding plan onto the county’s Capital Improvement Plan to be voted on in Saturday’s County Board meeting, while Garvey and Vihstadt voted against it. Vihstadt made six motions to strike the streetcar and all of its allocated and related funds from the CIP, but all of the motions failed, 2-3. In his motions, Vihstadt called the county’s streetcar PR campaign “Madison Avenue advertising,” a charge Fisette described as “offensive.”

Earlier in the work session, Garvey asked whether $2-3 million allocated for bus shelter improvements can be paid out of Transportation Capital Funds, which are currently earmarked for the streetcar. County Attorney Stephen MacIsaac said while it’s a possibility the funds could be used for bus shelters, he said they are intended by law for capacity improvements or building transit.

If the CIP is passed on Saturday, county staff can begin design and engineering on the streetcar project with hopes that it can deliver the system within the next decade. One result of the change in funding sources resulted in staff believing the Columbia Pike and Crystal City streetcar lines can be delivered simultaneously.

The Sierra Club issued a statement today urging the County Board to approve the CIP and move forward on the streetcar.

“The sooner we can get more people riding on a clean Columbia Pike Streetcar and out of their polluting cars the better,” said Rick Keller, Chair of the Sierra Club’s local Mount Vernon Group. The group has supported the streetcar plan since 2007, saying that “only the streetcar will meet the growing ridership needs of the Corridor, promote environmentally sustainable transit oriented development, and ensure the continued availability of affordable housing.”

Other elements approved for inclusion in the CIP on Thursday did not generate the same back-and-forth debate as the streetcar.

When County Manager Barbara Donnellan presented the CIP in May, her presentation about “Public Land for Public Good” drew controversy. Fisette, however, in the beginning of the work session, tabled the discussion on that platform until September, after the Board returns from its August recess.

Other items Fisette placed on Saturday’s CIP, approved unanimously by the County Board, include $1.37 million for Tyrol Hill Park, improvements to Courthouse Plaza and transportation improvements in the East Falls Church neighborhood.