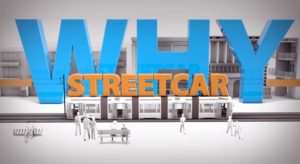 The county-run Arlington TV channel has released another series of videos explaining why the county is moving forward with its half-billion dollar streetcar system.

The videos are part of the county’s renewed effort to justify the massive streetcar investment to the public. The controversial project — which includes streetcar tracks in Crystal City and along Columbia Pike — is supported by County Board members Jay Fisette, Mary Hynes and Walter Tejada, but opposed by members Libby Garvey and John Vihstadt.

Previous videos released by the county included the following titles: “Because more people will want to ride the streetcar;” “Because Metro was a success and streetcars will be, too;” “Because buses alone can’t carry enough people;” “Because streetcar improves connections;” and “Because it will broaden our tax base.”

The streetcar remains a source of controversy, with ardent advocates and detractors among local residents. The county plans to fund the streetcar system with federal, state and transportation-designated local funds, though Fisette recently asked county staff to come up with a way to pay for the streetcar without federal funding.