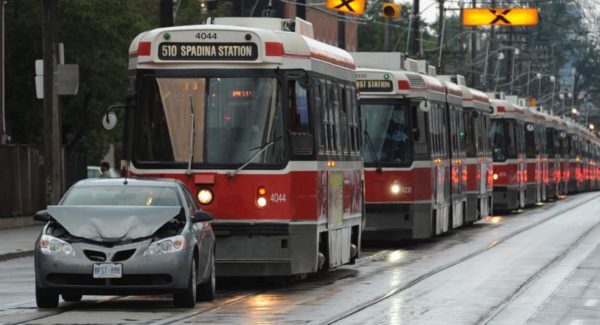 (Updated at 2:55 p.m.) Arlington County Board Chair Jay Fisette says the streetcar is a “strategic investment” that will drive economic development. But he acknowledges that it has an image problem.

Delivering his State of the County address to members of the Arlington Chamber of Commerce on Tuesday, Fisette said “the workhorse modern streetcar” gets a bad rap from critics who say it would be waylaid frequently by vehicle accidents and other possible obstructions on the tracks.

Fisette pointed to an image that has popped up on blogs and in Powerpoint presentations given by critics. The image, above, shows the aftermath of a minor vehicle accident in Toronto that caused at least a half dozen streetcars to back up behind a damaged car on the tracks.

“It’s an image emblazoned in people’s minds that has distorted the debate a bit,” Fisette told the crowd.

In reality, Fisette said, such accidents will happen “very infrequently.” When it does, obstructions will be cleared from the tracks as expediently as possible. “There is a protocol in place for dealing with that quickly,” Fisette said.

Plus, Fisette argued, it’s not exactly uncommon for accidents to cause delays for vehicle traffic.

“Backups happen daily on the Beltway due to broken down cars and accidents,” he said.

(Those who oppose the streetcar also point out that streetcars themselves are sometimes involved in serious accidents with vehicles and pedestrians.) 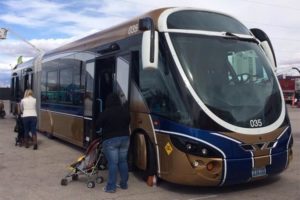 Critics, like Board members Libby Garvey and John Vihstadt, say an enhanced bus system would offer many of the benefits of streetcar without the high cost and inflexibility of fixed rail. They have at times pointed to a “streetcar-like bus” in use in Las Vegas (pictured, right) as an alternative.

Fisette said fixed rail is, at least partially, the point. People — himself included — are more likely to ride a train with a fixed route than get on a bus.

“I fundamentally disagree” that buses are better than streetcar, Fisette said. “Streetcar is much more comfortable, much more accessible… multiple doors, better for wheelchairs, much smoother ride. I myself know that when I go to another city, do I jump on buses? No. Really, would I get on a rail system that’s fixed and tells you where you’re going? Yes.”

Fisette’s most oft-repeated argument for the streetcar was its higher ridership capacity. He said that prior to the Board’s streetcar approval, during a long planning process that asked Columbia Pike residents what they wanted, the community signaled that it did not want Metro and the density that would come with it, but did want more amenities.

In order to continue to revitalize Columbia Pike — and thus build more housing and retail — Fisette said there needs to be more capacity for transit than buses can provide. Already, the Pike is Virginia’s busiest bus corridor, with 600 bus trips daily carrying more than 17,000 passengers. With the Pike and Crystal City expected to account for 65 percent of the county’s population growth and 44 percent of its job growth over the next 30 years, Fisette said the streetcar is the right system to get people to where they need to go. 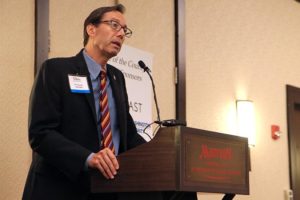 “No possible bus system can handle that ridership growth,” he said.

On the issue of how to pay for the streetcar — which carries a total price tag of more than half a billion dollars — Fisette said 93 percent of streetcar funding will come from “federal, state and regional money,” including a 12.5 cent commercial real estate tax designated for transit. He said he opposes using homeowner tax dollars for streetcar

At the same time, Fisette said he’s looking for a possible way to move forward without federal funds, since federal funding would come with strings attached, would increase costs and would slow the project down.

“The time has come to act and move forward without delay and build the streetcar system that I know will benefit all of Arlington,” Fisette said.

Those claimed benefits include up to $4.4 billion in added real estate value and $735 million in new tax revenue over 30 years, plus three times the projected return on investment compared to enhanced bus systems. Added streetcar-driven development will, counter-intuitively, enable the county to preserve affordable housing on the Pike by using added density allowances as the “currency” for securing affordable housing contributions from developers, according to Fisette.

“Without that density, developers wouldn’t have the incentive to protect affordable housing and it would be lost,” he said, while pledging to work with county staff to a better job of communicating the benefits of the streetcar system to Arlington residents.