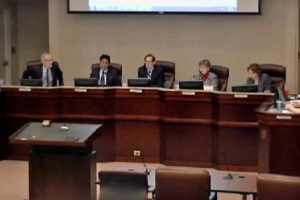 There will be no voter referendum on Arlington’s streetcar system, said a majority of Arlington County Board members in a coordinated PR blitz Tuesday afternoon.

County Board Chairman Jay Fisette, Mary Hynes and Walter Tejada all read statements at Tuesday’s County Board meeting, stating opposition to a referendum on the streetcar and giving reasons why they support the $585 million project.

The Board members said they oppose using general obligation bonds to build the streetcar lines on Columbia Pike and in Crystal City. Rather, they expect to fund the streetcar with a mix of federal and state funds and with transportation-designated local business tax revenue.

“After careful consideration, I have come to the conclusion that I do not support a referendum on streetcar,” Fisette said in his statement. “Under Virginia law… a referendum question must be tied to a vote on General Obligation bonds — and it is my commitment that we will use zero homeowner-financed general obligation bonds to build the streetcar.”

“I will walk away from the project rather than violate that pledge,” Fisette continued.

(About $71 million of the expense will be shared with Fairfax County, since the Pike streetcar will extend to Skyline.)

“The time has come to act, to move forward without delay to build a streetcar system,” Fisette said.

Hynes, meanwhile, refuted arguments that the streetcar will take money away from other community needs, like schools. She and Tejada cited a study that suggests the streetcar will generate $735 million in new take revenue, thanks to added development along the streetcar line, over a 30 year period.

Tejada said he only supported the Columbia Pike streetcar after the county put plans in place to retain 6,200 units of affordable housing along the Pike while adding 14,000 new residences.

“There are better ways than a referendum to address concerns people have about this project,” said Tejada.

The coordinated statements from Fisette, Hynes and Tejada were accompanied by pro-streetcar materials generated by county staff. Among them were a press release (below, after the jump) and a series of 30-second video commercials explaining reasons why the county is building the streetcar, including:

“The County needs to do a better job of communicating the clear benefits of the modern streetcar, and we will do better,” Fisette said in his statement. “I would ask Arlington residents to study and learn about the issue — to go beyond the sound bites and give the matter the full consideration that this community always gives important issues.”

Apparently no one communicated anything about the referendum statements to Board members Libby Garvey and John Vihstadt. Garvey and Vihstadt, who oppose the streetcar and advocate instead for enhanced bus service, both expressed surprise at the statements.

“Reasonable people… can differ about whether to hold a referendum, and whether the streetcar itself is worthwhile,” said Vihstadt, who then spoke of his reelection in the fall. “Fortunately there are other ways that the voters are able to express themselves on this issue, including elections in which candidates stand for office. There will be another such opportunity in November and the people look forward to it.”

Vihstadt, who was elected as an independent candidate, will face Democrat Alan Howze in the fall. Howze expressed support for a streetcar referendum last month.

“Where I come from, when we’re passionate about issues, there’s way to solve that, and it’s with a vote,” she said. “I think that’s how a democracy works. “

“Businesses pay taxes, they’re going to have to raise their prices… we’re all going to be paying for this streetcar,” she added. Later, she tackled a key argument for the streetcar by saying that “the capacity issue is flat out false” and that there are large articulated buses with the same capacity as streetcars.

“I look forward to the referendum we do have, which will take place in November,” Garvey concluded, referring to Vihstadt’s general election fight.

Arlington County Board Chair Jay Fisette, Vice Chair Mary Hynes and Board Member Walter Tejada each announced today that they do not favor holding a referendum on the County’s planned 7.4-mile streetcar system.

“After careful consideration, I have come to the conclusion that I do not support a referendum on streetcar,” Fisette said during Tuesday’s June Recessed County Board Meeting.  Hynes and Tejada echoed that conclusion.

All three Board members are committed to the streetcar, “but not at any cost,” Fisette said. Their continued support depends upon the County’s ability to finance construction by leveraging a combination of federal, state, regional and local commercial funds dedicated to new transportation projects.

“We will build the streetcar only if it does not require Arlington homeowners to take on General Obligation bond debt to pay for it,” Fisette said. “We would walk away from the project rather than violate that pledge.”

After years of public discussion, studies, analyses and debate, and several votes by both the Arlington Board and the Fairfax County Board of Supervisors, Fisette said, “the time has come to act – to move forward without delay to build a streetcar system.”

Much of County’s growth expected along streetcar route

The 7.4-mile streetcar route travels through two areas of the County that combined, will account for 65 percent of Arlington’s overall population growth and 44 percent of its overall job growth over the next 30 years, Fisette noted.  “No possible bus-alone system can handle that ridership growth,” he said.

A modern streetcar, Fisette said, “will ease congestion,” and attract new private investment “that will benefit our entire County in increased property values and increased tax revenues that will help fund services and infrastructure across Arlington.” No possible bus-only alternative would come close to matching the expected return on investment of the streetcar, he said.

Reading a prepared statement, Fisette said that he, Hynes and Tejada had each consulted extensively both with the community and with the County Attorney, before arriving at their conclusions.

“We have heard your questions and concerns and have moved to address them,” Fisette said. He and his colleagues “are determined that the streetcar will be built in a cost-effective and timely manner. We will closely oversee this project.”

The County recently took an important step when it signed a program management contract with Parsons Transportation Group, Fisette said, that requires the firm to look for ways to cut costs and reduce the timeline for delivering the streetcar.

Hynes and Tejada made their own statements regarding the referendum.

Hynes said the Board will not let funding for construction of the streetcar affect other priority community needs, such as schools.

“Our record as a Board clearly shows that we take fiscal concerns seriously as we strive to achieve our vision,” Hynes said. She cited recent decisions to put the Long Bridge Park center on hold and to re-engineer the transit stations along Columbia Pike — a move that reduced that project’s costs by more the 40%.  “The same steps must and will be taken with the streetcar program,” she said.

“Fundamentally, this is all about expanding our tax base as a way to create a vibrant, diverse future for our entire County,” Hynes said.

Initially, Tejada said, he shared he concerns of many in the community “that the growth spurred by this investment would mean many of the working class residents who call the Pike home today would not be able to do so in the future.”

However, plans the County has put in place to retain 6,200 units of affordable housing and add 14,000 new residences on the Pike have won him over, Tejada said.

“Investment in streetcar will generate up to $735 million in new tax revenues for Arlington over a 30-year period – more than three times the amount generated by enhanced bus,” Tejada said. “This will directly result in more money for affordable housing. It will also mean more funds for other County services, including schools.”

The statements came as the Board is considering the County Manager’s Proposed 10-year Capital Improvement Program, which includes funding for streetcar. Board Members Libby Garvey and John Vihstadt have called for all spending on streetcar to be frozen and for the County to hold a streetcar referenda. The Board will vote on the CIP at its July meeting.

Fisette urged streetcar opponents to “join together and work to make this project a success and a source of pride for our entire community.”