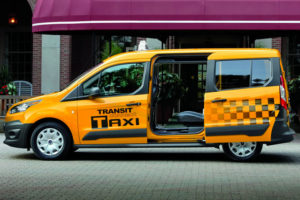 (Updated at 3:35 p.m.) A new taxi company that hopes to have a fleet of wheelchair-accessible vehicles is applying for taxi licenses in Arlington, but it may have an uphill climb.

All Access Taxi has submitted applications for 60 taxi licenses with Arlington County, which allows companies to request additional taxi licenses for two months every other year, according to county Dept. of Environmental Services spokeswoman Shannon Whalen McDaniel.

All Access Taxi COO Rick Vogel told ARLnow.com that his company would be the first in the region to offer 100 percent of its fleet as wheelchair accessible. The former Envirocab executive claimed that the standard wait for a wheelchair-accessible cab in the D.C. area is about three hours.

“There really isn’t anything for spontaneous service,” Vogel said. “Reagan lies within our boundaries, yet there’s no accessible service there. About once a week, someone gets stuck there with no way around. There are just no taxis.”

“I think Arlington has always been a leader in disabled issues,” Vogel continued. “All our buildings are accessible, everything is, except our cabs. At first I thought of it as a business idea, but now it’s becoming a cause. It upsets me because they can’t get around town.”

Vogel said he plans for the company to be headquartered in South Arlington and to train drivers in assisting people with disabilities. He plans on purchasing vehicles like the Ford Transit Connect (pictured), the Dodge Caravan, the Honda Odyssey and others. Each cab will be equipped with a wheelchair ramp in the back, a fire extinguisher and a first aid kit.

“Based on staff’s quantitative analysis,” Donnellan wrote, “there are sufficient bases to justify maintaining the existing number of taxicabs (750 vehicles and 37 wheelchair vehicles) authorized to operate in the county.”

Donnellan and her staff will make her final recommendations by Oct. 15, the Transportation Commission will make its alternative recommendation on Nov. 15 and the County Board will decide whether to approve new certificates, if any, at its December meeting. The county issued 22 new licenses in 2012, and didn’t issue any in 2010.

According to Donnellan’s memorandum, the county’s population has increased by 3,300 since 2012, but the workforce has shrunk by 6,900 jobs. While there are roughly the same amount of cabs per person now than before the new certificates were issued, there are now 3.47 taxicabs per 1,000 employees, as opposed to 3.36 in 2012. The overall number of cabs dispatched has increased 1.1 percent over the course of the last two years.

Donnellan wrote in the memorandum, however, that a new application for a certificate might be considered if the applicant provides adequate reason or innovation. Vogel believes his company deserves to be awarded certificates to serve a chronically underserved populace.

“I think this idea’s time has come,” he said. “These people have money to spend, but they can’t get to where they want to go. I think at the end of the day, we can make people’s lives better.”