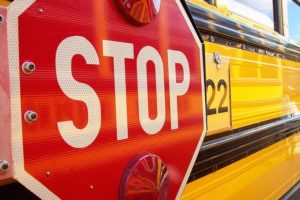 Drivers who speed past school buses when their flashing red stop signs are extended will soon be caught on camera and fined $250.

The Arlington County board approved a policy on Tuesday night to install high-resolution cameras on the “stop arms” of school buses to catch drivers who don’t stop to protect children.

“Any car passing a stopped school bus, throw the book at them,” County Board Chair Jay Fisette said.

The cameras will automatically capture photos and video of any vehicle that passes a school bus from behind or the front when it is stopped with its driver’s side stop sign extended.

The images will be reviewed by a vendor selected by Arlington Public Schools through a competitive bidding process and then sent to the Arlington County Police Department. Police will then send citations to the vehicles’ registered owners.

The cameras will be installed and operated at no cost to APS, which will share ticket funds with the vendor and reimburse ACPD for reviewing the footage. According to County Board documents, in Falls Church a school bus camera vendor receives 75 percent of revenue in the first year of a contract, 60 percent in the second year and 50 percent in subsequent years.

The $250 fines will be payable to Arlington Public Schools, which may earmark the money for school bus and pedestrian safety programs.

“This is not about money, it’s about safety — and the red light cameras aren’t either. It’s about saving lives and reducing injury,” Fisette said.

County Board members opted to push back the effective date of the ordinance to Feb. 1 to put in place policies on storing, accessing and sharing the recordings.

“I’m very concerned about wandering in here without some conversation about what the limits and our expectations are,” she said.

Lt. Mike Watson said the images caught on camera will be held for 60 days if an infraction is recorded, and then deleted.

“If there are no violations issued, that information will be purged 10 days after use,” he said.

If the cameras were to record another crime, the footage could be released only by court order, Watson said.

Violators will receive warnings, not tickets, for the first month the cameras are used. ACPD has issued an estimated 700 citations in the past five years to drivers who pass stopped school buses.