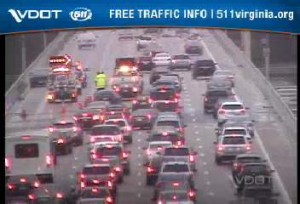 The entire stretch of northbound I-395 inside the Beltway was jammed up during this latter part of this morning’s rush hour, in part due to an accident on the 14th Street Bridge.

The left two lanes of the bridge were blocked by the accident, though as of 8:05 a.m. only one lane remained closed.

In addition to the traffic crawling on northbound I-395, heavy traffic could be seen approaching the 14th Street Bridge from the north and the south on the George Washington Parkway.

Traffic on eastbound I-66, meanwhile, was relatively clear through Arlington until the Rosslyn tunnel.