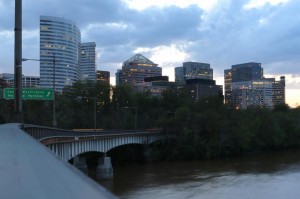 The Arlington County Civic Federation could weigh in on whether continued redevelopment in Rosslyn outweighs potential new safety regulations from the Federal Aviation Administration.

The FAA announced in April that it was considering changing the regulations around airports to accommodate “one engine inoperative” planes — aircrafts that have an engine fail on takeoff and can’t ascend into the air as fast. The new rule, if passed, would restrict the heights of buildings in the area surrounding airports, which could impact redevelopment in Rosslyn and Crystal City.

County Manager Barbara Donnellan sent a letter in July to the FAA stating the county’s opposition to the rule change. In the letter, she wrote “we share the FAA’s interest in ensuring that air navigation in and around airports is safe, with appropriate plans and procedures in place to account for emergency situations.”

“At the same time, Arlington is committed to our long-established smart growth and transit-oriented development policies, which includes creating mixed-use, high-density neighborhoods around investments in transit,” Donnellan continued. “Therefore, we share the view of other potentially-affected communities that the impacts be thoroughly evaluated through the formal rule-making process before any change is made.”

The Civic Federation, a county-wide organization made up of delegates from more than 80 civic and resident associations, could vote on a motion at its meeting Oct. 7 to oppose Donnellan’s letter, made by retired U.S. Navy Pilot Jim Pebley, a Civic Federation delegate. Pebley said Donnellan made only a cursory “head-nod” to safety, instead prioritizing economic development.

“If the FAA delays adopting the proposed rule, buildings in Rosslyn could soon grow past 450 feet,” Pebley said to the County Board this week. “That gives pilots flying a disabled plane two bad choices: try to clear the buildings or turn early and cross over central Arlington… Madam Manager, your letter’s head-nod towards safety and argument about the rule change’s economic impact on smart growth is not the responseI’d hoped my County would make. You know, having a ‘downtown’ airport comes with economic benefits and safety responsibilities.  You can’t have an urban airport and unlimited development crowding airliners.”

Pebley’s resolution would “urge” Arlington County government to work with the FAA on building height safety regulations instead of trying to fight such regulations.

The FAA introduced the change as a “proposed policy,” which, according to Rep. Jim Moran, meant the administration could circumvent the typical rule-making procedures, including a cost-benefit analysis by the federal Office of Management and Budget. Moran said the proposed policy was written to allow airlines to overload plans with cargo and passengers, because a plane hitting a building with one engine out of commission “never happens.”

“The airlines and the airports authority are acting out of greed,” Moran said in May. “It’s self-centered on their part. It’s disappointing and it should be stopped in my view. I’m just asking that they go through the normal, standard rule-making procedure where you look at the real-world impact, but they don’t want to consider what the economic impact would be in surrounding communities because their stovepipe attitude is they exist for the benefit of the airlines.”

The Civic Federation meets Tuesday, Oct. 7. If the FAA policy were passed, buildings already built would not be affected — about 170 in Arlington, Moran said — but, if they were to be redeveloped, they would have to be built shorter than they are now.