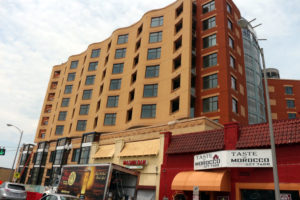 A late night healthy food option could be on its way to Clarendon.

Toss’d, a new salad business, is planning to open in the ground floor of the new Beacon at Clarendon West apartment building near the corner of Washington and Wilson Blvds. The company launched a Kickstarter page this week to raise $50,000 to help with the cost of building the restaurant’s interior.

“I’ve noticed that the fast food salad industry is sort of at its infancy stages of growing, so I thought it was a good chance to enter the market,” Jason James, one of the restaurant’s owners, told ARLnow.com today. “Something we’re really trying to do is not just bring in the healthy concept of a salad shop, but something farm fresh and GMO-free.”

James said he plans to keep Toss’d open until 3:00 a.m. on Thursday, Friday and Saturday nights, to serve as a late night option for the bar crowds in Clarendon. The location is less than two blocks from Clarendon Ballroom, Clarendon Grill, Spider Kelly’s, Mad Rose Tavern and O’Sullivan’s Irish Pub, among other popular watering holes.

“In Clarendon, there are 22 bars that are open, and when all those let out at 2:00 a.m., there are two places that people can get food,” James said. “There’s Goody’s Pizza and Bronx Pizza, so we thought we could be a healthy alternative. We’ll change up the atmosphere and music for late night crowd, and give them something different.”

James said the $50,000 Kickstarter goal — the funding round closes Oct. 25 — is just part of the investment that will go into the restaurant; he also has secured bank loans and private investors. He also said he’s using Kickstarter as a way to market the business. Another marketing strategy he plans to use: during Toss’d’s grand opening weekend, he plans to give away salads to residents and office customers in the area for free.

“We just want to get our name out there,” James said. “That way people can be excited for a new alternative to fast food in the Clarendon area.”

Toss’d is still negotiating the lease with the building’s retail manager, Asadoorian Retail Solutions, but once the space is confirmed, James estimates a four-month buildout period.