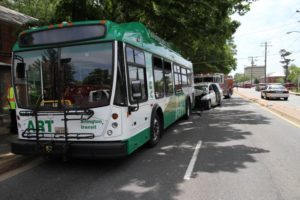 (Updated at 3:00 p.m.) A 4-year-old boy was separated from his mother after an ART bus drove away with him on it and her still at the Ballston Metro station this afternoon.

The mother was folding up her infant’s stroller and preparing to get on the ART 52 bus when the boy and an adult male boarded. The bus driver assumed the man was the 4-year-old’s father, according to Arlington County Police Department spokesman Dustin Sternbeck. The bus driver then “took off” without the rest of the small child’s family.

The driver told police that she didn’t see the mother outside, preparing to board.

The mother, distressed, called the ART bus hotline, which told her the next bus would be waiting for her at its next stop — Virginia Hospital Center — Sternbeck said. The mother and infant boarded the next ART bus, but there was no bus and no son waiting at the hospital.

At that point, police were called and responded to the hospital and to the bus’s next stop, the East Falls Church Metro station, where the bus with the boy turned around and drove back to the hospital, ending a stressful afternoon for the young family. The separation was deemed accidental and no charges were filed.