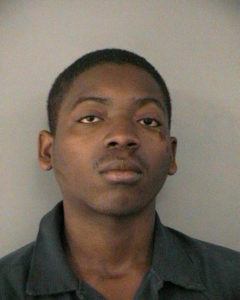 (Updated at 2:20 p.m.) A 19-year-old D.C. resident tried to stab multiple people outside First Down Sports Bar in Ballston last night before fleeing from police, avoiding a taser and ultimately being tackled and arrested, police say.

Larry Sutton was already wanted for armed robbery by the Metropolitan Police Department when, while intoxicated, he attempted “to stab several patrons with a knife” at 8:30 last night, according to the Arlington County Police Department.

First Down owner Ramesh Chopra told ARLnow.com this afternoon that the incident began when Sutton and another individual got into an argument outside the bar. Sutton began swinging a knife, after which the other individual entered First Down, where Sutton followed. Chopra said Sutton swung the knife inside the bar once before the two were kicked out and Chopra locked the door.

After that, Sutton “just started to go after passersby,” Chopra said, swinging his knife at two different people on the sidewalk before the police arrived.

Sutton ignored police demands to drop his weapon and fled toward the Ballston Metro station, the police report said.

According to ACPD spokesman Dustin Sternbeck, the officers hit Sutton with a taser, but it did not bring him down. Ultimately, officers had to “execute a takedown” to subdue and arrest him.

Sutton is being charged with three counts of attempted malicious wounding, resisting arrest, obstruction of justice, underage possession of alcohol and drunk in public. He is being held without bond. From the crime report:

MALICIOUS WOUNDING, 140929062, 4200 block of N. Fairfax Drive. At 8:30 pm on September 29, an intoxicated subject attempted to stab several patrons with a knife at First Down Bar. Police confronted the subject on scene and after failing to comply with officers commands to drop his weapon, the subject fled on foot to a heavily populated area near the Ballston Metro Station. Officers attempted a taser deployment but ultimately took the subject into custody following a takedown. The weapon was recovered and Larry Sutton, 19, of Washington, DC, was arrested and charged with three counts of attempted malicious wounding, resisting arrest, obstruction of justice, underage possession of alcohol and drunk in public. Sutton was also wanted out of Washington, DC for armed robbery. He was held without bond.

END_OF_DOCUMENT_TOKEN_TO_BE_REPLACED

More Stories
Superintendent Gets Low Marks from Teachers in PollAsk Adam: Determining the Current Value of Our Home