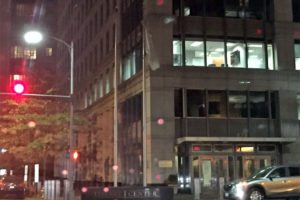 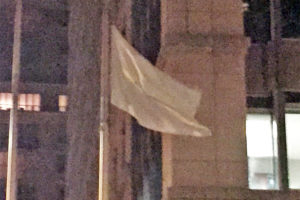 Update at 2:15 p.m. — Office of Naval Research spokesman Doug Abbotts said that the flag is that of the building’s property manager, and it was left up overnight this week while the American flag was taken down. Abbotts said that while it looks like a plain white “surrender” flag, the logo is “faded, but it’s there.”  The white flag has since been taken down.

For two days this week, the Office of Naval Research building, at 875 N. Randolph Street in Ballston, was flying a white flag on its flagpole, not its usual stars and stripes.

Lori Klein lives in the building behind ONR’s headquarters, and she said the flag was up Wednesday and Thursday nights before she talked to a security guard last night. This morning, the white flag was nowhere to be seen and the American flag was back in its normal place.

“I was walking my dog when I saw the flag, so I stopped a security guard and told him about it,” Klein told ARLnow.com over the phone today. “He had no idea it was up there.”

A spokeswoman for the ONR was not aware of the flag when first contacted by ARLnow.com.

The flag was seemingly reminiscent of the work of German artists this summer, who replaced two American flags on the Brooklyn Bridge with white flags.

If it was a prank “somebody really pulled something off… considering there are cameras and security guards all over the place, and how high alert they must be on,” Klein said.

The Office of Naval Research is an agency within the Dept. of Defense that “coordinates, executes, and promotes the science and technology programs of the United States Navy and Marine Corps.”