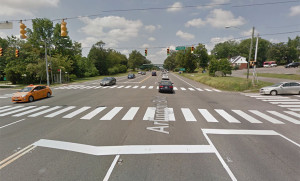 A cyclist was seriously hurt when a car ran a red light on Route 50 and struck her in the crosswalk last night, according to police.

The 26-year-old woman was crossing Route 50 (Arlington Blvd) at N. Irving Street just after 6:00 p.m. when a driver in a westbound Honda Accord blew through the red light, according to Arlington County Police Department spokesman Dustin Sternbeck.

The woman was struck and thrown a distance, landing on the westbound lanes, Sternbeck said. She was transported to the trauma center at George Washington University Hospital with “significant and critical injuries.”

Rush hour traffic was “significantly impacted” during the accident investigation. All but one lane in each direction was closed for about two hours, according to Arlington Alerts.