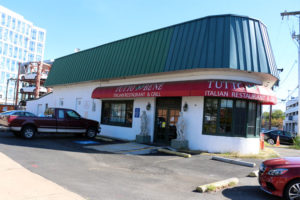 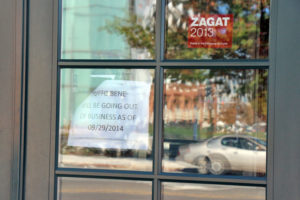 Owner Orlando Murillo posted on the restaurant’s Facebook page that its last day open was Sept. 29, and a sign on the restaurant’s front door reads “We’re going out of business as of 09/29/2014.” Murillo said in his post that the restaurant never recovered from the recession, despite the continued growth of Ballston’s food scene.

“The great economical problem that hit us since 2009 was [the] number one problem and not easy to resolve,” Murillo wrote. “We were hoping that in a couple years we will come back on our feet, but that never happened. It was very sad to see how things were going down hill and all the progress coming to Arlington bring the increases that we were not able to overcome.”

“On September 30, 2014 we decide that there was no way for us to continue in business, and it was an extremely sad day for me and my employees. The fact that they stayed with me from the first day to the last, 26 years together living every day as a big family I will keep all of them deeply in my heart.”

The restaurant drew rave reviews from Washington Post food critic Tom Sietsema in 2004 for both its Italian food and its special Bolivian food offerings on the weekend. There’s no word on what will replace it.