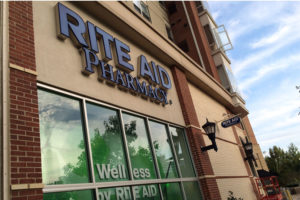 A man with a gun tried to rob the Rite Aid pharmacy on Pentagon Row Friday night, according to Arlington County police.

The man entered the store just past 8:00 p.m. and brandished a gun at the pharmacist, demanding prescription medications. The pharmacist was able to shield himself behind protective glass, foiling the robbery attempt.

The suspect took off on foot before police arrived.

“The suspect is described as a white or Hispanic male in his twenties, approximately 5’8″ tall and 160 lbs,” according to a crime report. “He was wearing a black long sleeve sweater, blue jeans and a white and orange baseball hat at the time of the incident.”