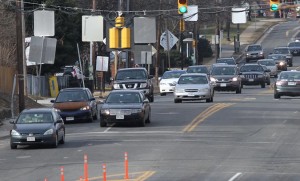 Those frustrated with their morning commute on Columbia Pike aren’t likely to see relief come until the spring.

After that time, the traffic will again go back to using a right exit off Columbia Pike to get on the interstate in the direction of D.C.

The left turn isn’t the only headache Pike drivers will have to deal with as the $48.5 million construction of the Washington Blvd bridge over Columbia Pike continues. Scheduled to start in early December, McCord said, S. Queen Street will be closed to traffic at Columbia Pike for six months. “Local traffic will enter/exit Arlington View and Carrington Village via S. Quinn or S. Rolfe Streets,” McCord said.

On Washington Blvd, the temporary signal at the Columbia Pike exit ramp has been removed, and crews will be pouring the concrete deck for the second bridge on Monday after steel beams were installed in September, McCord said. There will continue to be daytime lane closures in the area until the project is complete in a year.