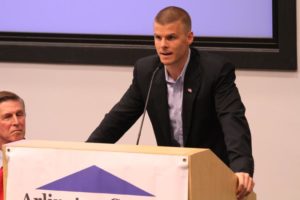 Simply put, you should vote for me because it’s in your best interest to do so.

Do we agree that there’s no such thing as a free lunch, and that it’s wrong to print $ trillions out of thin air and hand it over to Wall Street in order to enrich the 1 percent at the expense of the 99 percent? Do we agree that it’s time we eliminated all forms of corporate welfare, and that the federal government should not be in the business of picking winners and losers or doling out favors to this industry or that one?

Do we agree that we shouldn’t constantly be picking fights around every corner of the globe, that putting our service members’ lives at risk for yet another war in the Middle East is not a good idea, and that (high-level) a foreign policy of non-interventionism — by way of free trade, smart diplomacy, and honest friendship — might just be the best way to go?

Do we agree that having the highest incarceration rate in the entire world is not something we Americans should be particularly proud of, and that it’s about time we stopped putting people in prison for using a substance? Do we agree that we should be treating drug use — and in particular, drug abuse — as a public health issue instead of a criminal one? Do we agree that the practice of civil asset forfeiture is about as unconstitutional as it gets and needs to be stopped immediately?

Do we agree that we shouldn’t have to worry about being spied upon by our own government? Do we agree that Benjamin Franklin was right when he said: “Those that give up essential liberty to obtain a little temporary safety deserve neither liberty nor safety.”?

Do we agree that when it comes to our children’s education, parents, teachers, principals, school boards, and local communities should have (much) more of a say than Washington bureaucrats and labor unions?

Do we agree that the opportunity for a better life — the American Dream — should be available to those honest, hardworking people around the world who would choose to come to this great country to pursue it?

Do we agree that individuals and families tend to make better decisions than lobbyists and bureaucrats when it comes to our personal lives and financial affairs?

I’m betting we agree on a whole heck of a lot.

Einstein once said: “The definition of insanity is doing the same thing over and over again expecting different results.”

If you’re concerned about the direction our country is headed — as I am — and if you want to see meaningful change in Washington — as I do — maybe it’s time you tried something new at the ballot box. Maybe it’s time you voted for a Libertarian.