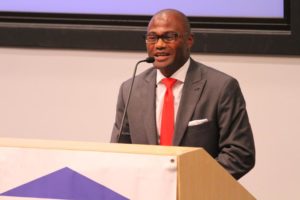 The congressional race in the 8th District to replace Jim Moran should be about your priorities and your future. You deserve a candidate that spends no time attacking anyone else, no time talking about their political party and no time looking backwards. Instead, you deserve a candidate that talks about an inclusive future. That’s specifically why I didn’t put a political party label on my campaign literature. I believe all that mattered was telling you my vision, my priorities, and my plan to achieve those priorities.

I believe leaders rise above party and should be measured by results rather than popularity or polls. While leaders should have common principles and values rooted in organizations like political parties, they should be willing to abandon party orthodoxy when it pushes for all or nothing extremes over a willingness to compromise on bi-partisan, practical solutions that achieve progress.

I got into this race last year because I was tired of partisanship that blocked results in Congress on both sides of the aisle. Both were willing to accept sequestration as a partisan political issue to campaign on in the mid-term elections rather than embrace a bi-partisan compromises like the President’s Simpson-Bowles Commission and Congress’ Joint Select Committee on Deficit Reduction, both of which I was happy to serve on as a senior advisor. The failure to enact these compromises proves that while we have real, bi-partisan solutions, we lack real leaders willing to compromise and enact them.

So here is why I would like your vote.

I would be proud to have your vote and represent the whole 8th district. I have continued to make my campaign forward looking and inclusive. With your support, you can trust me to bring a new vision, a new voice and a new energy to making the American Dream achievable again for all people.

Please visit www.micahedmond.com for more information, or email me at [email protected]

END_OF_DOCUMENT_TOKEN_TO_BE_REPLACED

More Stories
Jeffrey Carson: Why You Should Vote for MeRental Report: Five Tips to Keep Your Place Warm This Winter