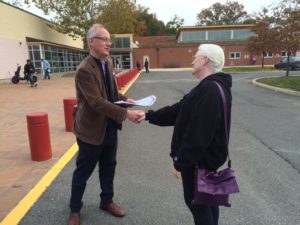 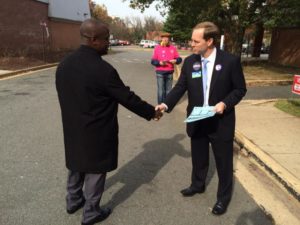 No one, not even the closest of followers, expected Arlington County Board member John Vihstadt to win re-election on Tuesday by as big a margin as he did.

Vihstadt, an independent, became the first non-Democrat elected to the County Board since 1983. But the eye-opener was how he did it: by winning 39 out of 52 Arlington precincts, even though every one of those precincts chose Sen. Mark Warner (D). Vihstadt took almost 56 percent of the vote and received almost 7,500 votes more than Democratic challenger Alan Howze, out of 62,663 votes cast.

In his regular post-election report to the Arlington County Democratic Committee on Wednesday night, former Arlington County Treasurer Frank O’Leary struck a somber tone and said he was surprised by low turnout.

“I woke up this morning and I didn’t feel so good,” he said. “We had a turnout of about 48 percent. That stinks, particularly when you’re expecting a turnout as high as 61 percent. What the heck is going on? Very disappointing… I had talked about the County Board race that if turnout gets down to 60,000, if Vihstadt had 30,000 he was going to win.

“He did it,” O’Leary continued. “It didn’t seem possible, it didn’t seem likely, but it happened. The end result, if we look in terms of comparisons: first our candidate won 13 precincts, Mr. Vihstadt won 40. That’s really unheard of. I can’t even think of the last time that occurred. Last time I can think of anything like this was 1979.”

“We were not expecting it to be like this,” he said. “When it came in, it was just euphoric. You always have doubts; it’s very rare in modern politics that you get this many people to split their ticket. Somehow this got pulled off. I didn’t fall asleep that night just because of the adrenaline.”

Brescia said the streetcar was on many voters’ minds, but voters had other concerns, too. Vihstadt is adamantly against the streetcar, while Howze supports it.

“The streetcar was the biggest one issue, and we definitely made it a big part of our materials,” the campaign manager said. “It definitely wasn’t the only thing going on. A lot of people have generic frustrations with the county, responsiveness issues, spending issues, feeling like they’re not being listened to.”

County Board Chair Jay Fisette — who, along with Board members Walter Tejada and Mary Hynes, still make up a pro-streetcar voting majority on the Board — said Vihstadt’s messaging related to the streetcar caught voters’ attention. Fisette suggested voters chose Vihstadt because they were misinformed about the streetcar.

“I think there has been a lot of focus in the last year on that issue,” Fisette said after the ADCDC meeting. “This community has such a history of being thoughtful and policy-oriented … Here on this issue, what has been created and what we see at the moment is a lack of even agreement on some fundamental core facts about the issue.

“It’s almost like climate change,” Fisette continued. “Is it based on science that it’s true, or is it not?”

While Vihstadt has voted for and donated to Republican candidates, Brescia said the campaign was truly independent, with a handful of Democrats, Republicans, Green party and independents attending most meetings.

“The nature of this campaign was just so odd, precisely because it really a coalition of people across the political spectrum,” said Brescia, an economist who volunteered to be campaign manager.

Though Vihstadt raised almost $230,000 toward the campaign, there were no paid staffers, Brescia said, and Vihstadt’s cable commercial — which ran during the Washington Redskins Monday Night Football game on Oct. 27 against the Dallas Cowboys — was produced for free by a supporter.

The confluence of factors that created Vihstadt’s success have led many people to ask, Who is the next John Vihstadt?

Vihstadt is a candidate “with a rare civic resume,” Brescia said. He has served on numerous boards and commissions in Arlington for years. He is the “best Republican candidate they’ve put forward in 30-40 years,” Fisette said. No names have surfaced yet, but there are already rumblings.

“I know a chatter has begun in certain circles, but I haven’t thought about any of that yet,” Brescia said. “But there’s going to be somebody from some corner who will mount a serious run.”

The margin of Vihstadt’s win has Democrats bracing for an even tougher challenge next year, when Tejada and Hynes’ seats are both up for election.

“Tighten your seatbelts,” O’Leary told his fellow Democrats on Wednesday night. “We’re in for a bumpy ride next year, a really bumpy ride.”