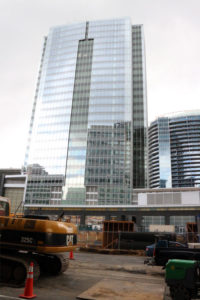 Developers may have to meet higher environmental standards in Arlington if they want to continue to construct buildings with “bonus density.”

The County Board could approve measures on Saturday to increase the green benchmarks it requires of developers who are seeking more density than zoning allows. The change in the Green Building Program would coincide with the U.S. Green Building Council’s update to its LEED certification system, which raises the standards by which buildings are approved for silver, gold and platinum ratings.

According to the county’s staff report, a working group from the National Association of Industrial and Office Parks, after reading staff’s recommended changes, “expressed concern that the proposed changes will make it more costly to do business in Arlington, claiming that the additional costs will be reflected in residential and office rental rates.”

“The current proposed changes to the green building bonus density incentive program are intended to incentivize exceptional energy efficient design and construction as well as efficient energy performance post-occupancy, while continuing to focus on holistically designed and constructed buildings,” the staff report states. “An incentive program is needed in Arlington to encourage developers to incorporate high levels of energy efficiency into new buildings and to ensure performance post-occupancy.”

Although the new standards are more stringent for developers, if approved, they also would allow more bonus density than the incentives currently on the books. If a building achieves the LEED Silver level, the developer can request a 0.25 increase in Floor Area Ratio, which is the square feet of the building divided by the size of the plot of land. If the building reaches LEED Gold, the developer can seek up to a 0.35 FAR bonus. If the building can achieve LEED Platinum, the bonus density can reach 0.50 FAR.

In order to receive the bonus density, however, all office buildings must be rated at least a 75 on the U.S. Department of Energy’s Energy Star system, to ensure the building is sustainable once it is already occupied. Residential developments are not required to meet the Energy Star standard, but they can earn additional bonus density if they do.

Buildings that can achieve “net zero energy construction,” as defined by the International Living Future Institute, are LEED Gold Certified and meet at least two other county environmental benchmarks can receive bonus density above 55 percent FAR.