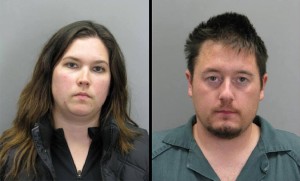 The Courthouse-based law firm of Bean Kinney & Korman is confirming earlier reports that its managing shareholder, Leo Fisher, and his wife were stabbed in their McLean home on Sunday.

In a statement, the firm also confirms that one of the suspects, Alecia Schmuhl, 30, was an attorney at the firm. Her employment ended on Oct. 28, less than two weeks before the attack, Bean Kinney said.

Schmuhl and her husband, Andrew (both pictured), have been charged with two counts of abduction and two counts of malicious wounding.

The Washington Post, citing prosecutors and police, reports that Andrew Schmuhl entered the house after pretending to be a police officer, tied Fisher and his wife up and then repeatedly stabbed them. The couple were arrested after a car chase, and Andrew was wearing nothing but a diaper when he was taken into custody, the Post reported.

Both victims are still in the hospital. Their wounds were described as life-threatening.

The statement from Bean Kinney is below.

As reported through multiple media sources, Leo Fisher, Bean Kinney & Korman’s managing shareholder, and his wife were savagely assaulted and repeatedly stabbed in their home by intruders, identified as Andrew Schmuhl and Alecia Schmuhl, husband and wife. Alecia Schmuhl was an associate attorney with the firm from February 13, 2013, through October 28, 2014. As the matter is a subject of an active police investigation, the firm is unable to comment further on the circumstances of her employment and separation from the firm.

We are shocked and horrified by the facts of the matter as presented at this morning’s bond hearing for Ms. Schmuhl, and entirely support the decision to deny her bond. Our hearts go out to a wonderful colleague and his beloved wife. We are doing everything possible to support them through this ordeal and pray for their recovery. We are confident in the ability of the judicial process to achieve a just outcome and will fully cooperate with the Fairfax County investigative authorities to assure that those who have committed these unspeakable offenses against good people are fittingly punished for their actions.

END_OF_DOCUMENT_TOKEN_TO_BE_REPLACED

More Stories
Your Beermonger: Deschutes (Finally) Lands in VirginiaRosslyn ‘Corridor of Light’ Not Expected Until 2017