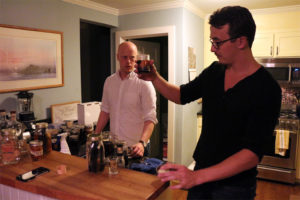 Michael Volz and Bryan Olson look like kids in a candy store in Volz’s kitchen, filled with jars of differently colored and aged liquors, with wood charring in the oven and a German shepherd peeking his snout in for smells of the activity.

This is ground zero for Age it Yourself, the company Volz and Olson started this year that allows anyone with their kit to barrel-age whiskey — or any liquor, for that matter — without waiting years and using giant, or even small barrels.

The method is simple. Each kit comes with a mason jar and freshly charred American oak, from fallen trees in the backyard of Olson’s family’ home in Great Falls. The oak is cut in a specific way to maximize the long grain wood — the only part of a real barrel liquor touches — and charred in a custom oven Volz built with his carpenter father.

The wood, jar, a special glass bottle, a flask, a funnel and instructions are then shipped, ready to use. Whoever buys the kit simply has to add the liquor, which can be anything from moonshine, to create a standard aged whiskey, bourbon, to age it further, or even cocktails like Manhattans. The kits sell for $50, and each batch of oak can be used about three times. 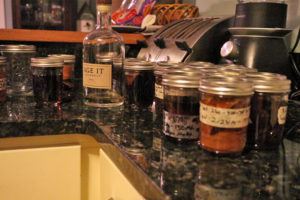 To help launch the company, Volz and Olson created a Kickstarter with a goal of $10,000 to buy more glass, fulfill orders faster and generate buzz. Volz admitted that he and Olson have slaved over the method and recipes so much that they haven’t focused much on the digital marketing side of the business — the Kickstarter has 12 backers and $731 donated with 17 days to go — but the Kickstarter is just one component of the business.

“We’re sort of going at it with three tiers,” Volz said. “There’s the retailers and customers and, there’s the wholesalers to push it to more people, and one thing we’re seeing that we didn’t expect is the producers, the distilleries, have interest.”

One distillery, Iowa Legendary Rye, is already in contact with Volz and Olson. The market is there, as Olson said, because “If you want to start a new liquor company, and you want to sell aged liquor, you can’t sell it until it’s aged. You need to age it quicker.” 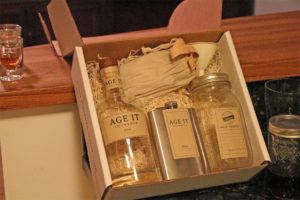 Volz and Olson met at law school at George Mason University in Arlington, and both graduated this spring right as they were developing the idea. Volz is a veteran of the D.C. bar and restaurant scene, and he’s used his connections to place Age it Yourself in a few locations, including The Liberty Tavern in Clarendon, that want to barrel-age their cocktails on the bar.

The interest from businesses along the supply chain of the liquor market gives the pair confidence that regardless of the Kickstarter, they have a viable path to move forward as a successful endeavor.

Of course, the big question with a company like Age it Yourself: how does it taste? How does it work?

Volz and Olson indulged ARLnow.com with a brief tasting session, starting off with a sip of moonshine “to see what we’re starting with.” After that, it was on to the whiskey, aged in the jar for just over a week. The first difference was the color: the spirit starts to brown within hours after contacting the oak. After a week it’s a deep, translucent color, and it tastes sweeter, and, like Volz described, a little like a campfire. 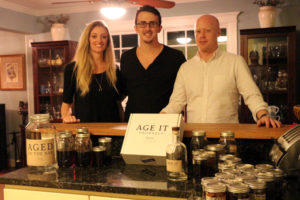 After the whiskey, it was on to the negroni — a gin, vermouth and Campari cocktail — which was delicious. The coup de gras was the tequila, aged in the jar, and smooth all the way down.

“The tequila is unbelievable,” Olson said, commenting on Volz’s constant experimentation. “Everything we’ve made with our final product right now is great, but we’re always improving.”

Age it Yourself kits that are purchased through Kickstarter are expected to arrive before Christmas for gift season. Volz and Olson said they were inspired by another Arlington startup, Homemade Gin Kit, but the pair’s vision goes far beyond mailing boxes, bottles and wood.

“A year from now I’d love to have a system set up where we’re developing new flavors, we have enough of a customer base for people to get excited about it,” Olson said. “We’re looking into expanding into other areas, like selling more traditional, larger barrels, and trying to get into a lot more bars. Five years from now, we’d love to partner with a distillery or, maybe, create one ourselves.”

Read more →
More Stories
Board Approves Resident Plan for Future of Waverly HillsScratching Post: How to Do Raw Right